Bolton willing to testify in the Senate impeachment trial

Former national security adviser John Bolton announced in a statement that he is willing to testify in the Senate impeachment trial of President Donald Trump. Bolton, who was ousted in September, has been a key figure in the impeachment inquiry. Multiple witnesses in the House impeachment inquiry testified that . . .

Senator Capito talks about impeachment (on Fox News, of course)

And from her responses, she also didn’t watch the same hearings that I watched

BAIER: Senator, there are some Republicans, Will Hurd from Texas, others, who've said that what the President did and how he did it was inappropriate, but not impeachable.

Jury members lunch with the accused and discuss the upcoming trial

Publicly, a number of Republican senators have declined to comment on the mounting evidence against president Donald Trump citing the possibility that they would later become jurors -- they would weigh the evidence in the Senate trial. For example, here’s West Virginia’s Capito:

No bias here -- so please keep moving (with afternoon update)

Our morning “newspaper” continues its efforts to re-elect Senator Capito

Headlines are important. Frequently, it’s all that readers read.

Here’s the headline from The West Virginia Press Association:

Senators Manchin and Capito announce more than $7.9 million for workforce and . . .

Senator Capito to attend "Save the Senate Retreat" this week

See if you can guess where it will be held 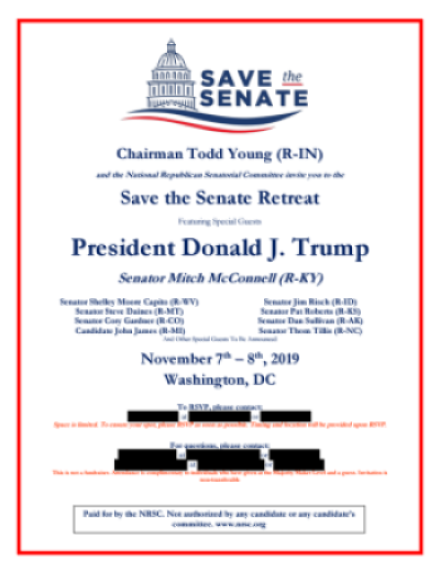 The location is not listed in the invite. Where will it be held?

Guest staying at President Trump's hotel in Washington, D.C. during a Republican event being held there will be paying three times more than the usual room rates, . . .

The official Republican line had previously been that there was “no quid pro quo” involved in Trump’s request that Ukraine launch (unfounded) investigations into the server allegations and into the Biden family, while the Trump administration happened to be refusing to release military funds to . . .

Note – I am not making this up

The president of a group that opposes abortion rights and LGBTQ protections has announced he is running for U.S. Senate, challenging Republican incumbent Shelley Moore Capito in the May primary election.

The candidate is Allen Whitt, who is current president . . .