The Merriam-Webster Dictionary tells us that an earmark is

a provision in Congressional legislation that allocates a specified amount of money for a specific project, program, or organization.

The New York Times recently reviewed and published its findings on 2022 congressional earmarks. It found:

How did our local representatives fair?

Senators Shelley Moore Capito and Joe Manchin both made it to page 1 of the Times 7-page Senate list: 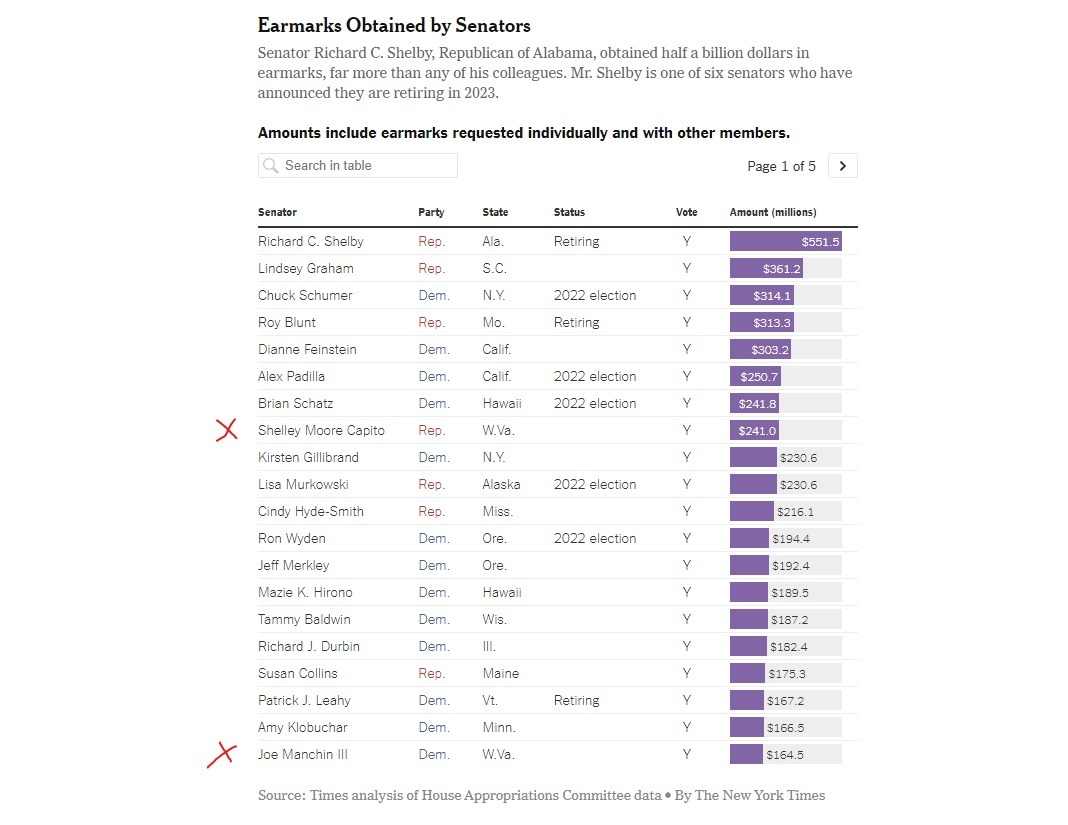 In the House, David McKinley at $7.2 million is found on page 7:

The House leader was Missouri Republican Blaine Luetkemeyer at $56 million. Additionally, McKinley’s opponent in the Republican primary, Alex Mooney, apparently did not request earmarks or his request was turned down – he is listed at zero dollars.

The one vote listed on the Senate page and the two votes noted on the House page are how the senator/representative voted on the legislation that contained the earmark. As the Times explains:

Winning earmarks did not necessarily translate into support for the spending measure, particularly in the House, where it was split into two sections, defense and nondefense, as two separate votes were held.

(In the above examples, Capito and Manchin did vote for the legislation that contained the earmark. On the other hand, McKinley voted “no” on both measures that contained his earmarks.)

Additionally, in last year’s post on McKinley’s earmarks, I noted the McKinley Plan which he put forward in 2012 when he first ran for Congress. Among other promises, McKinley pledged that he would not propose non-defense earmarks. From that plan:

David refused to insert earmarks into legislation as a member of the West Virginia House of Delegates and he will carry this precedent into Washington by proposing legislation to ban any federal earmarks not related to national security.

(Note -- it would appear that at $7.2 million in earmarks, the congressman no longer honors that commitment.)

From her website, here are Capito’s specific earmarks for the Northern Panhandle:

Since it makes the Ogden favorites look good, I’m sure we will eventually see coverage of this. In particular, given the upcoming Republican primary, I would also watch for an editorial telling us what a great job David McKinley is doing for the local area (although the word “earmark” may not appear). If that happens, add the Intelligencer to the hypocrisy column. From an Intelligencer editorial back in 2016:

Remember when Congress said it was eliminating earmark spending? Absurd wastes of taxpayer money through pork barrel projects were going to be a thing of the past. Not so fast. These were politicians making those promises.

Congress has made it easier to waste our money, not harder. Surprised?