Yes, Senator Capito appears to be selling out 175,000 West Virginians

According to Capito, she's "transitioning" not "phasing out"

Here is Senator Capito's twitter response to a question raised by Peter Sullivan, who writes for The Hill:

I had an interesting exchange just now with Sen. Capito on 7 yr phaseout of Medicaid expansion $. She prefers to say "transitional . . .

Finally, someone calls out Capito on healthcare

The Gazette Mail catches on while the Intelligencer continues to ignore

From an editorial in this morning's Charleston Gazette Mail:

Many observers hoped that Sen. Shelley Moore Capito, R-W.Va., who is somewhat moderate, would rebel against her party in the Senate and save millions of Americans from losing care.

However, her office revealed last week that she will kill the ACA in a slightly . . .

More on Senator Capito and Trumpcare

It's being worked out in secret and it appears that it will be pushed through with little or no debate. Here is what Sarah Kliff at VoxCare wrote late yesterday:

Behind closed doors, Senate Republicans have worked out a path toward Obamacare repeal. The plans under . . .

Is Senator Capito changing her tune on support for the Medicaid expansion?

On health care, Senator Shelley Moore Capito has consistently argued for continuing the Medicaid expansion instituted under Obamacare. As a result, political analysts usually put her on the list of Republican senators that would likely vote against a health care bill similar to the one passed by the House. Here, for example, is the senator on . . .

Manchin's been talking (exclusively) to Breitbart -- what have Capito and McKinley been doing?

Capito on Trump's Russian connections -- bravely not taking a stand

I googled Shelley Moore Capito and Russia and could not find any comments by Capito that dealt with the recent media revelations dealing with the Trump administration and Russia. Earlier this month McClatchy asked her about the formation of a special select . . .

What have West Virginia's senators been doing lately?

The Huffington Post warns that the funding for the coal retirees could be a major stumbling point in the passage of a budget:

A permanent funding fix for retired coal miners’ health benefits may be in trouble. And so could the federal government’s operation after the end of next . . .

McKinley and Capito continue to hide from their constituents 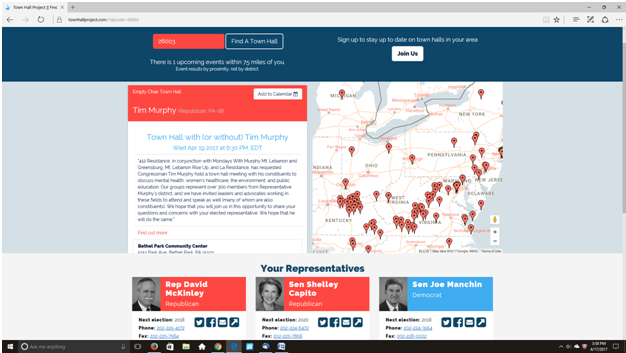 (Note -- the project flagged Rep. Tim Murphy who is a Pennsylvania . . .