Not much to see here

If you look for it, you can find a skeleton of a story on page 2 of yesterday’s Wheeling Intelligencer in the last column right below “Funerals Today."1 It’s a three paragraph AP report and the headline reads:

MORGANTOWN (AP) — Federal prosecutors have charged a Morgantown businessman with campaign finance fraud, alleging he used employees and their spouses to front donations to federal candidates that exceeded donation limits.

The indictment handed up Tuesday cites improper campaign contributions to four candidates but doesn’t name them. It says Laurita aggregated contributions using “straw” donors and Mepco money to give individual candidates more than $25,000.

That’s it. The AP story is about as bare-bones as you can get but it does point to campaign fraud. Since the story originated in-state and the company (Mepco) does mine coal in West Virginia, a real WV newspaper editor might see these sketchy details and say “hey, this may require more investigation.” Unfortunately for local readers, the Wheeling area is served by Ogden Newspapers where local politicians, especially favorites, are never questioned let alone investigated. Fortunately for West Virginians, there are real newspapers in the state. For instance, this morning’s Charleston Gazette-Mail has Ken Ward’s coverage of the indictment. Instead of the tiny 87-word AP report, we get a 951-word analysis.

The indictment alleges that during the 2010, 2012 and 2014 election cycles, Laurita met with Mepco employees and told them he would direct them and their spouses to make contributions of certain amounts to campaign committees for particular candidates, and that the company’s money would be used to fund the campaign contributions.

“It was part of the scheme and plan to knowingly conceal from the FEC, the committees, the federal candidates, and the public the true source and amount of the campaign contributions,” the indictment states.

While the candidates that received the contributions are not named in the indictment, Ward is able to identify them by their description. He then checked a database to see the extent of what they received from Laurita's company:

McKinley, Manchin and Capito all received thousands of dollars in contributions from Mepco employees, with McKinley receiving the most, nearly $80,000 during the election cycles of 2010, 2012 and 2014.

(I wrote myself a note to be sure to ask Congressman McKinley about this at his next town hall.)

I searched the recent archives of the Intelligencer to see what they have said about Mepco or James Laurita and came up with this AP story about Secretary of Energy Rick Perry’s July 7 visit to a West Virginia power plant accompanied by McKinley, Manchin and Capito:

The article describes the group’s visit to the Longview Power Plant, a relatively new and more efficient coal plant:

The Longview Power project cost about $2 billion, according to company officials. It gets coal directly from an affiliated Mepco LLC mine 2 in southern Pennsylvania along a 4.5-mile conveyor belt.

And here’s the AP picture that accompanied that article: 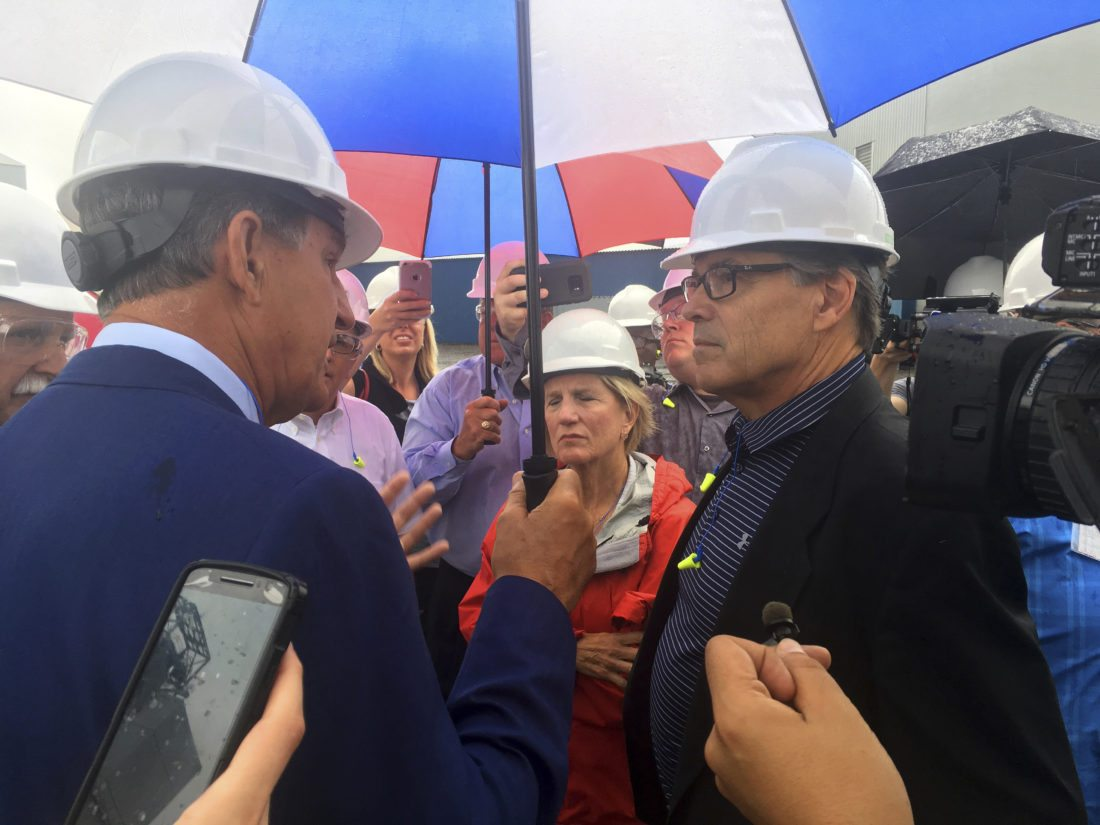 The online version of Ward’s article links to an even better picture from a Longview PR release.

Note 1 -- there must have been an increase in the number of funerals -- the afternoon News-Register did not cover the story.

Note 2 -- the Longview plant and Mepco are part of the same company according to Longview's webpage:

The plant is fully integrated with Mepco, LLC, its source of fuel, and is designed to utilize run-of-mine coal, avoiding the added cost and environmental impacts of fuel preparation.