Whoever pays you, owns you: a look at who finances our congressional representatives

I’ve been kicking around writing about this broad topic for quite a while. Today’s post, however, was originally going to be about the stock actions recently taken by Senator Capito’s husband, Charles. As required by the 2012 STOCK Act, such transactions must be reported within 45 days to the Securities and Exchange Commission. I was intrigued by what Senator Capito reported, and the more I researched the subject, the more I realized that it was time to take a closer look of Shelley Moore Capito’s connection to the financial community.

Charles Capito is the managing director and complex manager at Wells Fargo Bank’s office in Charleston. Here are the Capito’s stock transactions for the last six weeks as reported to the SEC: 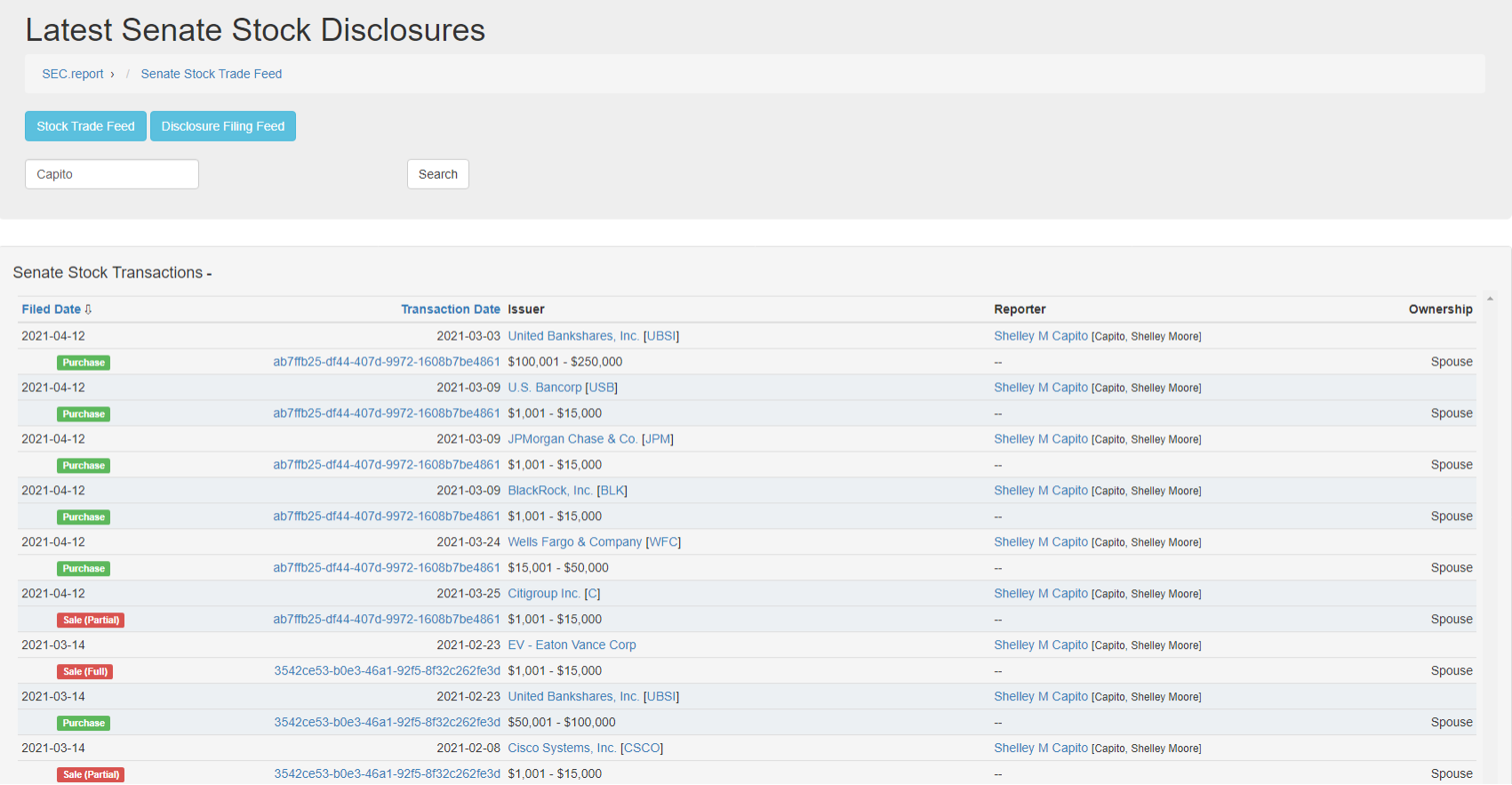 The report uses ranges rather than specific dollar amounts, but it appears that Capito, during the period, bought at least a couple hundred thousand dollars’ worth of UBSI (United Bank), headquartered in Charleston, West Virginia. (He also sold shares of Citigroup, Eaton Vance, and Cisco.)

Interesting. If you click on the SEC link and scroll down, Capito appears to be an active trader which is not surprising, given his line of work. These purchases, however, again raise the question of whether members of Congress (and their families) should be buying and selling any stock. As CNN Business reported last December:

A lawmaker who owns shares in America's big banks might have different views on banking deregulation, for example, said James Cox, professor of corporate and securities law at Duke University.

"We should be very concerned about the fact that if you're able to profit on individual stocks, it may impact the kind of decisions you'll make for your activities as a Senator," said Cox.

Last year, Georgia Senators David Perdue and Kelly Loeffler were widely criticized for selling stocks with insider knowledge of how bad the pandemic would be.

(Additionally, The New York Times reported that Perdue made almost 2,600 trades during his 6-year Senate tenure.)

Senator Capito sits on both the commerce and appropriations committees. Certainly, there would be information there that is tradable.

If you do any investigating of the issue, you’ll find that this is a problem that plagues both parties. (Nancy Pelosi’s husband, for instance, does his share of trading.) Yes, preventing members of Congress from buying and selling continues to be pushed by some senators – for example, Elizabeth Warren unsuccessfully tried last December. But barring a major scandal, I have my doubts that any changes will be made to the current system. (Please note – I am not saying that Senator Capito or her husband have done anything illegal. I do believe, however, that there should be a ban on any stock trading by Congressional members and their families while they are in office - as Perdue and Loeffler recently demonstrated, there is too much room for abuse.)

Given her husband’s connection to the financial industry, I decided to research how much that group has contributed to her initial election and subsequent re-election campaigns. Before researching, I assumed that the energy industry would be her largest contributor, and I was wrong. From Open Secrets, here are the total contributions made by various industries since she first decided to run for Congress in 1999. 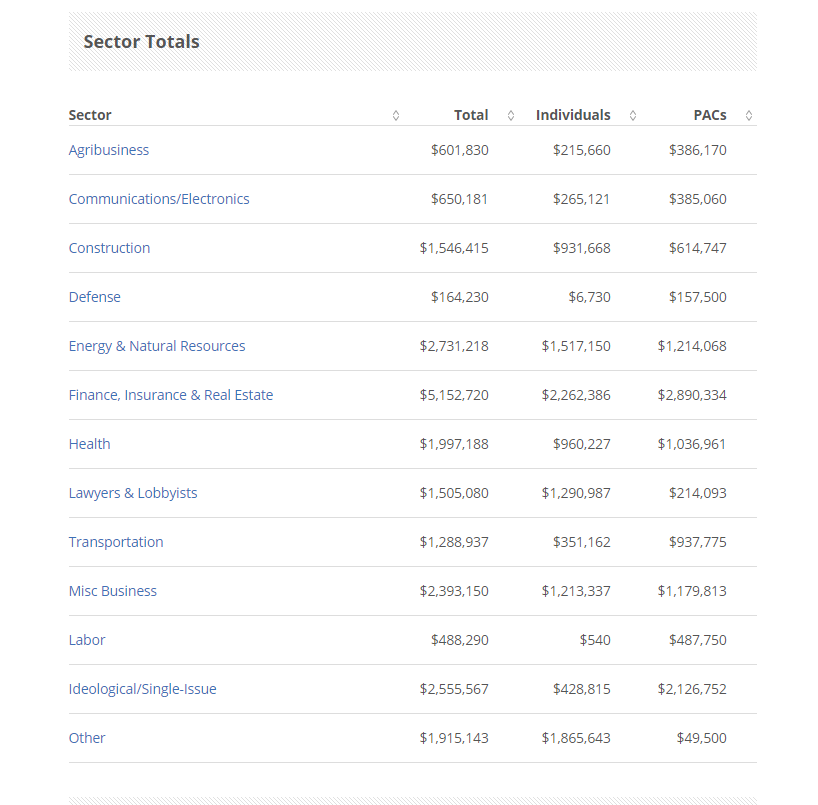 And here is an Open Secrets graph that looks at Capito’s fund raising by industry since she was first elected to the Senate in 2014: 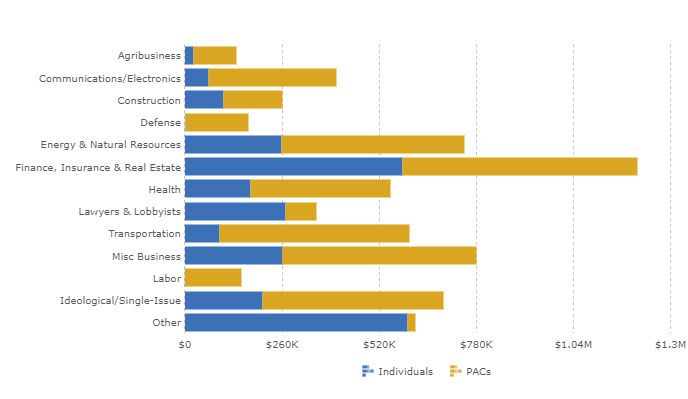 The numbers are not even close.

Who does Capito serve: the people of West Virginia or the financial services industry?

So what does that industry get in return for its financial support of Capito?

Support when then they need it. Here's a current example: Capito complains on a daily basis that Democrats do not want to compromise on infrastructure. Yet, when pressed on the possibility of raising the corporate tax rate to what it was before the Trump tax plan was passed in order to help pay for the plan, it becomes non-negotiable:

"A non-negotiable red line." Again, Senator, who is it that refuses to work with the other side?

Neither a financial institution or an energy corporation -- an interesting exception

If you exclude the political action committees (PACs) and look at just the companies contributing to Capito since her election to the Senate in 2014, an unlikely (at least, for me) name gets to the top of the list. There, among the more recognizable energy companies and financial institutions, you'll find the GEO Group, a private prison company. Huh? You're welcome to speculate.