Trump and the U.S. Postal Service

We’ve seen Manchin’s perspective -- does either Senator Capito or Representative McKinley have anything to say about Trump’s attempt to sabotage the USPS?

As I noted Saturday, our Republican senator has said nothing about Trump’s attempt to aid his reelection by crippling the post office. However, it appears that the senator has felt some pressure to comment – or at least give the appearance that she supports the USPS. This morning she tweeted the following:

Post offices are an integral part of our small communities in West Virginia, especially those who live in rural parts of our state. I understand the importance of protecting rural post offices from being unfairly targeted as a cost saving measure.

This financing will help meet the immediate needs of the Postal Service. I will continue working with my colleagues to make sure that the Post Office can provide its important services to people across West Virginia.

Huh? What does the passage of the CARES Act in March have to do with Trump’s attempt to kill the postal service? This irrelevant tweet is Capito’s desperate attempt to assure voters that she supports the USPS without criticizing Trump. Yeah, Senator, go fight for rural broadband while your president kills an even more important connection for rural West Virginians – postal service.

Our local representative has made no public statements (that I could find) that have criticized any of Trump's actions regarding the postal service. But McKinley has spoken up about cuts to the USPS. Ten days ago, Forbes described efforts by Congress to investigate the actions of U.S. Postmaster General Louis DeJoy:

Sen. Elizabeth Warren and other Democrats called Friday for the USPS’s inspector general to investigate after Sen. Gary Peters (D-Mich.) launched an investigation Thursday and a number of Democratic lawmakers wrote letters to DeJoy expressing their concern.

Republicans are now joining in: Four House Republicans—Reps. Peter King of New York, David McKinley of West Virginia, Brian Fitzpatrick of Pennsylvania and Daniel Webster of Florida—joined 80 House Democrats in signing a letter Thursday “express[ing] deep concerns” about DeJoy’s changes and calling for them to be reversed, and Montana Sen. Steve Daines and Rep. Greg Gianforte have separately sent their own letters criticizing the mail delays.

So McKinley joined the Democrats to express his concerns! Why would McKinley do this? I’m not sure but maybe this might explain it – with some more digging, here’s the top of Open Secrets's 2020 list of House recipients for the American Postal Workers Union PAC: 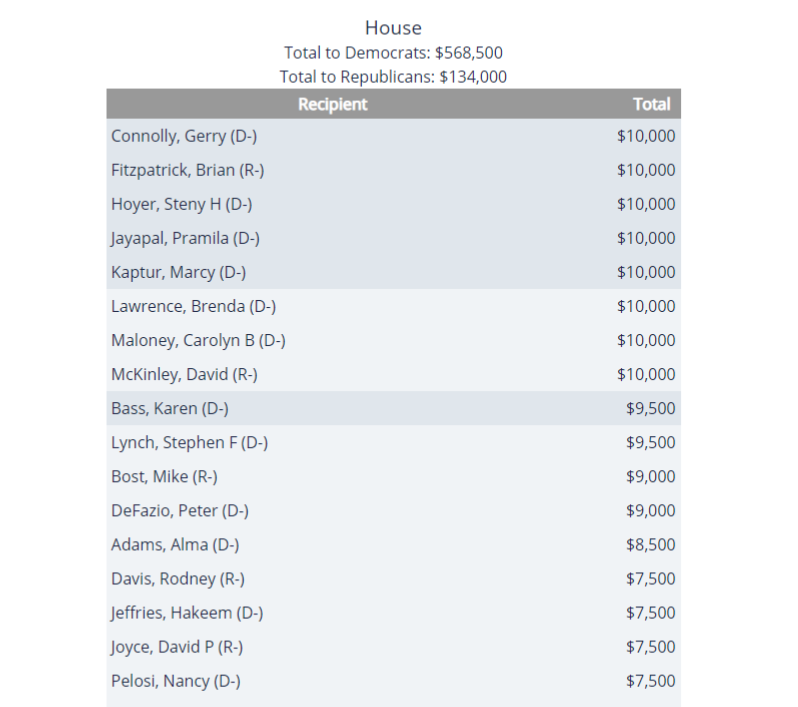 It should be noted that most of the money from the union went to Democrats. (Additionally, McKinley also received $10,000 from the American Postal Workers Union PAC in 2018.) So, McKinley is willing to “express deep concerns” about the operation of the postal service. But is McKinley willing to criticize DeJoy’s boss, the man who appointed him, President Trump? Not so far.

Congress is on recess and both Capito and McKinley will soon be doing media interviews. Will any state media source ask either of them a tough question about this? I wouldn’t bet on it.