A reaction to the Bransfield investigation, the proposed gas storage hub, and CNBC’s annual “worst states for business”

The religious section of this morning’s Washington Post has an op-ed by Michael J. Iafrate, who is co-coordinator of the Catholic Committee of Appalachia and a doctoral candidate in theology. Iafrate has been asking important questions of the Wheeling-Charleston Diocese for a number of years and his column argues that “too many questions remain” with the Bransfield case:

Now that Rome has issued its sanctions on Bransfield, church officials want us to trust that the punishment fits the crime and that healing can now begin. But Lori’s tight control of the report and his misrepresentation of its contents still prevent us from knowing the truth about the crimes in the first place.

If you have been following this story, I recommend Iafrate’s piece.

To this point, coverage of the proposed storage natural gas storage for local residents has consisted of bits and pieces of information bolstered by enthusiastic support from our politicians and local “newspapers” (jobs, jobs, jobs, prosperity, prosperity, prosperity). What does the average local resident know about the proposed natural gas storage hub? Okay, it will supposedly create lots of jobs. Beyond that, and I would be generalizing from my own knowledge, we don’t know very much at all. (For example, is there any downside?)

But a ProPublica examination has found that the proposed storage facility would be far larger than the region could support and that questions about its cost, its viability and its environmental risks have been overshadowed by a public relations strategy heavy on the politics of jobs and light on the economics of energy policy.

Schneider is right; we know very little about the project because all that we get from our legislative representatives and local media is cheerleading. We have heard from few, if any, voices that run counter to those who have the most to gain from its development. This article provides it and deserves more attention. 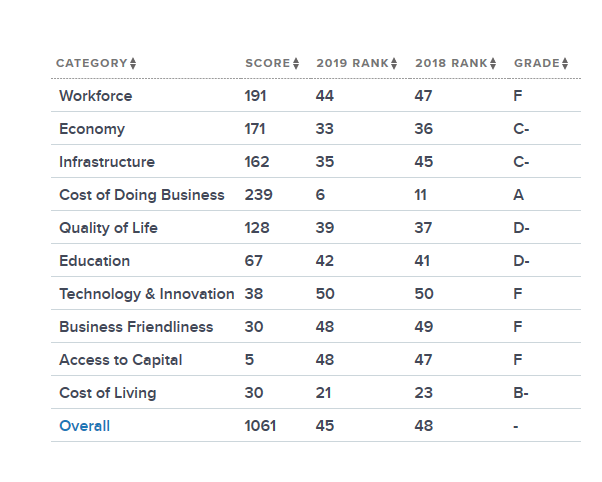 (If you are wondering, the top three states are Virginia, Texas and North Carolina and the bottom three are Mississippi, Hawaii, and Rhode Island.)

Curious, I compared this year’s numbers with CNBC’s rankings from 2014 which was the last year that the Democrat’s controlled state government. The 2019 numbers improved at least three places in two categories (cost of doing business and infrastructure) and dropped at least three places in one category (cost of living). The remaining seven categories have shown minimal, if any, change.

Of course, we’re regularly reminded of the role that President Trump has played:

The Great State of West Virginia is producing record setting numbers and doing really well. When I became President, it was practically shut down and closed for business. Not anymore!