Trump is president and the Republicans control state government

The West Virginia economy: so much winning!

Do you know that West Virginia is second in the nation in the percentage increase of GDP? Think of what that means. And Jim just said, “Before we met Trump, that number was not good.” Pretty close to last, right?

. . . . But now, think of that. Texas was first. Texas. Doing a great job. Great governor there, too. But Texas was first. West Virginia was second — percentage increase of GDP. That’s an incredible accomplishment in a short period of time. Incredible.

Trump said West Virginia “is second in the nation in the percentage increase of GDP.” That was true at one time, but West Virginia ranked 44th in the most recent quarter. For all of 2017, West Virginia’s GDP ranked 10th.

Despite what Congressman McKinley and other state Republicans proclaim, West Virginia's unemployment rate is higher now than when Trump became president:

In West Virginia, where Trump has promised to bring back coal jobs, the jobless rate has edged higher since Trump took office, hitting 5.4 percent in May, the latest state-level jobless data available.

So while the unemployment rate has dropped for most states, West Virginia's actually went up.

Its probably the best known of the national business indicators. Every July, CNBC releases its survey of "Top States for Business." Its methodology appears to be quite exhaustive which is probably why it gets coverage when it is released.

The 2018 survey was released yesterday and West Virginia is 48th (up from 50th). Here are the survey's capsule comments about West Virginia:

No. 48 West Virginia — last year’s bottom state — avoids an embarrassing repeat at No. 50, thanks to a relative rebound in its economy. Coal production has rebounded from depressed levels. West Virginia University researchers say output jumped 24 percent in the first half of last year, from 75 million short tons to 93 million. But the same report warns that growth is likely to level off soon.

I've put together a chart of the state's rankings on the major indicators. For comparison purposes, I've added last year's numbers and the results from 2014 which would be the last year in which Democrats controlled the governor's office and the legislature. 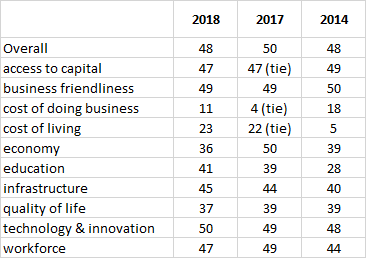 So where are the Republican cheerleaders?

Here is Republican Senate Majority Leader Ryan Ferns last September in an op-ed bragging about some of the good things that Republicans have done to improve the state's economy:

In the three years since taking control of the Legislature, the Republican Party has given the state plenty of economic development selling points. We’ve passed landmark legal reforms resulting in West Virginia finally shedding its reputation as a “judicial hellhole.” The Legislature has prioritized regulatory reforms that will put a halt to crippling red tape, repealing more than 160 obsolete rules and regulations in the process (approximately 10 percent of the total active rules for which the Legislature has oversight) and ensuring that new rules sunset after five years.

We’ve sought to provide employers with a clean and educated workforce by tackling education and substance abuse reform measures. Lawmakers have also laid the foundation for the infrastructure necessary to attract well-paying jobs, by investing in both our roads and our broadband infrastructure. And finally, we’ve provided one of the things that we’re frequently told is on every major employer’s check list — right to work.

Yes! And for your efforts, Ryan, West Virginia has moved from 48th place under Democratic rule to (drumroll, please) 48th place.

Looking ahead to an Intelligencer editorial

Local readers of this blog know that an Ogden "newspaper" editorial about the CNBC survey is on the horizon. Last year, the editorial faulted Governor Justice (he was still a Democrat at that point) for blaming Republicans when Democrats were actually to blame:

. . . the Republican lawmakers who have spent the last couple of years trying to reverse the 80 years of damage done by Gov. Jim Justice’s party.

(The only thing I found surprising in the editorial was that former president Obama was not even mentioned let alone blamed.)

Are we winning, yet?

Right to work laws have been passed and the prevailing wage is no more; apart from weakening or eliminating worker safety rules, we've adopted a good deal of ALEC's and Koch's business-friendly agenda. Hey, Mr. President and West Virginia Republicans: when do we start winning?