The state’s stenographers were kept busy this week

On Thursday, West Virginia Senator Shelley Moore Capito held another online press conference. Surveying the media landscape, I found different sources covering different aspects of the conference. For instance, Ogden Newspapers’ Steven Allen Adams gave local readers a front-page story on her co-sponsorship of the Electoral Count Act. The bipartisan piece of legislation is sponsored by Republican Susan Collin and Democrat Joe Manchin although neither is mentioned in the story. (Of course, they weren’t – the article is part of Ogden’s continuing Capito coverage.) And as required, 30% of the article consists of direct quotes from Capito.

The bill, as some have pointed out, is a response to Trump’s attempted coup. Here’s Jamelle Bouie in The New York Times:

A direct response to Donald Trump’s multipronged attempt to stay in power, the bill is meant to keep a future candidate for president, including a losing incumbent, from following the same playbook.

I agree with Bouie and other critics, it’s a good start and only that.

When Trump’s U.S. Supreme Court appointees were up for consideration, Capito assured us that they would follow precedent -- especially on Roe v. Wade. Despite their pledge to Capito, those U.S. Supreme Court appointments ignored precedent in its abortion decision. Some Americans are now worried that birth control and gay rights will be next. At the online conference, Capito was also asked about gay marriage and like the abortion issue, she refused to commit:

Sen. Shelley Moore Capito, https://t.co/69UuwCQ3AD., said she is undecided on whether she will support a bill to codify the same-sex marriage right. https://t.co/zcsEyC3q0t

Did any "reporter" ask her "why not?" My hunch is that, like the abortion issue, Capito will follow the Republican Party line and vote against any attempts to guarantee marriage equality.

On Thursday, Senator Capito was also on Metro News’ Talkline. Host Hoppy Kerchival allowed Capito to talk about immigration for the first half of the interview and then the subject moved to inflation. Here’s the shortened version of the interview:

.@SenCapito joins @HoppyKercheval to discuss the latest national topics, including border control and what needs to happen to limit illegal immigrants from crossing the border. WATCH: https://t.co/yCFQ3nm85Y pic.twitter.com/84ePZ7wOVv

Throughout the interview, Kercheval stays true to form with Capito -- nothing but softballs. (The whole interview can be found at the Metro News website.)

That immigration issue also came up on a WSPD talk show hosted by Scott Sands:

Sands and the senator also discussed the CHIPS legislation, inflation, and around the 4-minute mark, Nancy Pelosi’s husband’s stock dealings. Discussing Pelosi, Sands joked about legislators (and specifically the Speaker) making money from insider information. Since I wrote about Capito’s husband’s stock purchases last year, I found it interesting that Capito had no problem with Sands' attack on Pelosi. Curious, I looked-up Capito's recent stock activity. Here is the Senator and her husband’s reported trades for the last month according to Capitol Trades*: 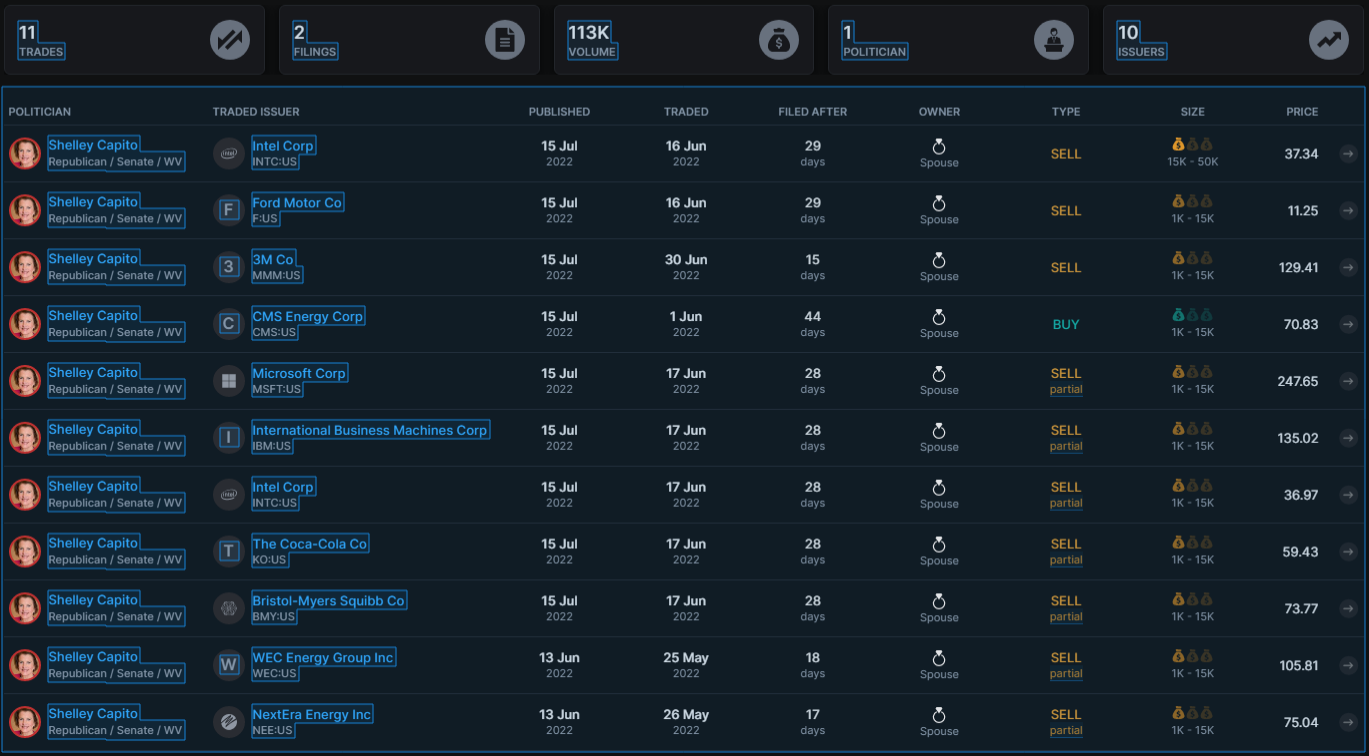 Clearly, Capito’s $100,000+ trades in one month is dwarfed by Pelosi’s millions. Still, I find it a bit disingenuous that Capito participates in Sands' Pelosi attack for something her husband also does -- albeit on a much smaller scale. Here, I agree with Robert Reich who argues that members of Congress and their immediate families should be banned from owning individual stock. I'd probably go farther – I'd also require that they place their ETFs and mutual funds in a blind trust.

As opposed to her senate counterpart, Joe Manchin, I cannot remember any member of the media having asked Shelley Moore Capito a difficult question. This week's questions kept to that standard.

*If you are interested in what our reps and senators are doing in the stock market, checkout that link to Capitol Trades -- the site is excellent.