Cheers and lies for the Republican team

This morning's Intelligencer editorial tells us that "GOP Senate Makes Progress." The editorial, however, is actually about praising an Intelligencer favorite, Shelley Moore Capito.

The editorial begins by comparing the Republicans' task to Sisyphus. (Yes, Sisyphus.)

. . . . it seems getting anything done between Capitol Hill and the White House is a chore the mythical character Sisyphus, who was condemned to spend eternity rolling a boulder up a hill only to see it tumble down again, would understand.

But, according to our editorial writer, it did happen:

On a notable number of occasions during the past year, lawmakers managed to roll the rock over the top on important issues, however.

At this point the logical next sentence would be for the editorial writer to provide examples of these accomplishments. (As in: "For example, Congress passed . . . .") Instead of examples (could it be that there aren't any), the editorial shifts its focus to Senator Capito:

Much of that improvement in the U.S. Senate occurred after Republicans had gained a majority in that body, Sen. Shelley Capito, R-W.Va., has pointed out.

One such improvement, as the writer sees it, would be diminishing the power of the EPA:

For several years, liberal Democrats in the Senate were successful in blocking efforts to rein in the Environmental Protection Agency. It should be noted our other senator, Democrat Joe Manchin, has stood up for West Virginia in opposing his party on that.

But this year, with Republicans in the majority, senators did approve some measures to curb the EPA's abuse of authority. One of them was a critical bill sponsored by Capito, to block enforcement of new carbon emissions rules on existing power plants.

The writer is obviously talking about the Affordable Reliable Electricity Now Act of 2015 which Capito sponsored and introduced in May. (See here.) The editorial tells us that the Senate approved the bill which is simply not true -- in fact, as this screen shot from congress.gov suggests, it did not even make it out of committee: 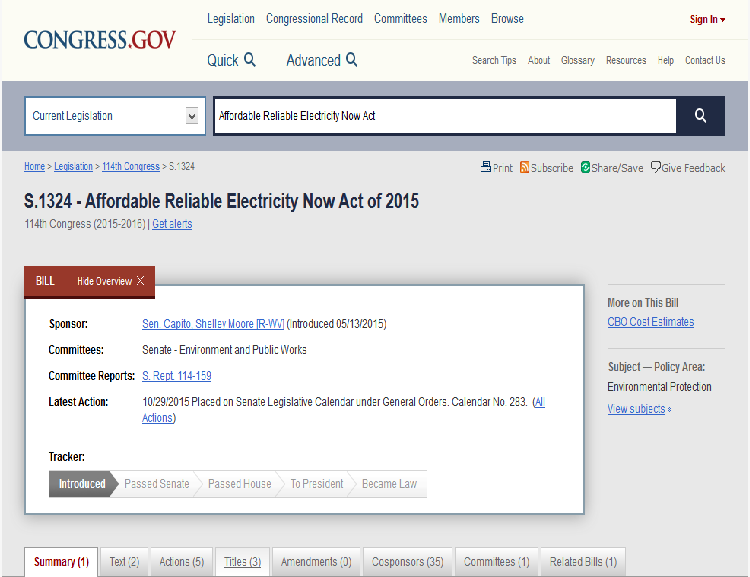 And then the senator is singled out for even more praise:

In addition, Capito has made progress on other priorities for Mountain State residents, including education, access to Internet broadband service and fighting drug abuse.

Which bill are we talking about? Of course, it was the omnibus budget bill passed earlier this month. In a follow-up editorial("Liberal Lawmakers Obama’s Strength") to the bill's passage the Intelligencer went to great lengths to demonize the bill claiming that it passed only because of Obama's liberal buddies. Nowhere in the editorial was it mentioned that Capito voted for the bill and now she gets credit for what's in the bill. Nice work.