WV news and stories from around the Web

State Integrity Investigation, a data-driven assessment of state government by the Center for Public Integrity. The comprehensive probe found that in state after state, open records laws are laced with exemptions and part-time legislators and agency officials engage in glaring conflicts of interests and cozy relationships with lobbyists. Meanwhile, feckless, understaffed watchdogs struggle to enforce laws as porous as honeycombs.

The bad news for West Virginia is that it received a D grade. The good news is that this was the 17th best. (Obviously, CPI does not grade on the curve.) The state received its best ranking for State Pension Fund Management (B-) and Internal Auditing (B-) and received a failing grade in Public Access to Information, Political Financing, Electoral Oversight, and Judicial Accountability. 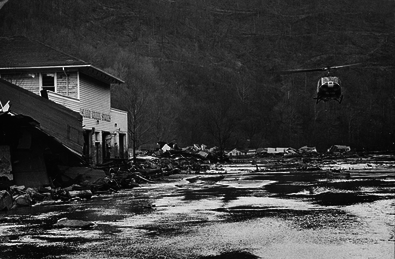 The Buffalo Creek mining disaster occurred in February 1972 in Logan County, West Virginia when a coal slurry impoundment dam broke killing 125 and injuring over a thousand area residents. Curbed has a lengthy, well-written story about the disaster and what has happened to the local population and their towns since then. Here's a sample:

There are two culprits on Buffalo Creek: coal and government. When the environment is wrecked, the government blames "King Coal," and when jobs dry up, coal companies blame the government's "War on Coal." And when the damage is too brutal and too obvious, coal blames God—using "an Act of God" as its official defense for most mining accidents, including Buffalo Creek.

"Three years after I had gone public with the [Martin County] cover-up, a reporter from the New York Times said to me, 'Why did my paper not cover this original disaster?' And I said, 'because it was in West Virginia.' Had it been a bunch of folks washed away with their lungs full of toxic mine waste in Connecticut, there would have been an uproar all over the country."

This real estate site would not be among the first places that I would expect to find this -- the story sits between "Sexy Desert Oasis Designed by Steven Holl Asks $2.5M" and "Midcentury Icon's Glorious First House for Himself Asks $1.4M." None-the-less it's an in-depth look at the area and some of its survivors.