Why do incumbents served by small-market media seldom lose elections?

Here's why: “WEB EXCLUSIVE: Rep. McKinley sits down with 7News”

The "WEB EXCLUSIVE" is on Wheeling's WTRF-TV website. (For some unknown reason, I have difficulty posting their videos. You can, however, watch all eleven minutes of the "exclusive" interview on their website.) A warning: there are no pointed questions just softballs that allow McKinley to deliver 11 minutes of Republican talking points. I don't expect a reporter to ask all tough questions, but how about just one: didn't President Trump say to Nancy Pelosi that he would be responsible for the shutdown?

So I will take the mantle. I will be the one to shut it down. I'm not going to blame you for it.

(See previous post.) Trump now blames Pelosi even though he didn't sign the agreement that the Democrats and Republicans had worked out in order to keep the government open. And now McKinley echoes Trump -- it's all Pelosi's fault:

"If Nancy Pelosi would just simply go public and say for the next 30 days or so, we will negotiate fairly and honestly, then I think we would open up government," Congressman McKinley told 7News. "But, no one trusts her. It's a matter of trust. So, that's why we have to keep it closed, why Trump wants to keep it closed. We've got to get this thing resolved and we have a tool now to get this thing done.

And our interviewer doesn't say a word. If you wonder why McKinley doesn't hold town halls, this is your answer. Private citizens might ask him a tough question, the media (including Mark Curtis who heads their 5:30 state news report) throw him nothing but softballs and basketballs. And as a special bonus to the local station, his answers can be sliced and diced and used as part of later newscasts. (Part of this interview was on last night's WTRF news and I'm sure we'll see additional segments in upcoming broadcasts.)

Some questions for Wheeling's Channel 7 News

Here's a screen shot from part of the McKinley interview: 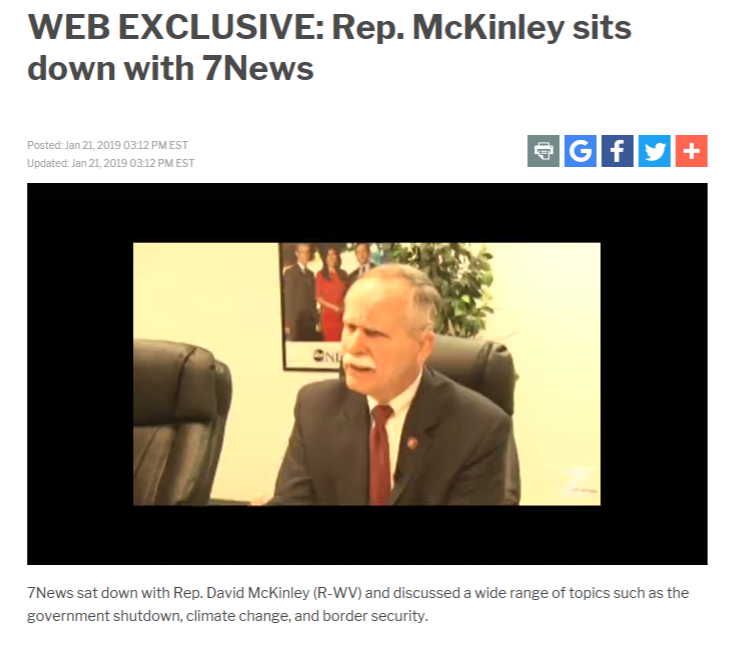 My hunch is that WTRF did not do this interview. McKinley mailed it in from somewhere, the station ran it and took credit for it. All parties are happy: McKinley gets lots of non-critical coverage and WTRF fills up part of its newscast.

With Ogden and WTRF, you just gotta love Wheeling media.