The official Republican line had previously been that there was “no quid pro quo” involved in Trump’s request that Ukraine launch (unfounded) investigations into the server allegations and into the Biden family, while the Trump administration happened to be refusing to release military funds to Ukraine.

“I don’t see a quid pro quo in here. I see a conversation between two leaders that is pretty broad-ranging.

But today, as Slate headlined, Mike Mulvaney admitted as much:

From his press conference:

MULVANEY: Did he also mention to me in passing the corruption related to the DNC server? Absolutely. No question about that. That’s it, and that’s why we held up the money.

REPORTER: So the demand for an investigation into the Democrats was part of the reason that he was ordered to withhold funding to Ukraine?

MULVANEY: The look back to what happened in 2016 certainly was part of the thing that he was worried about in corruption with that nation. And that is absolutely appropriate.

As for Capito, I think she’ll continue to ignore this issue even if Trump’s defenders have changed tactics – my hunch is that the senator will probably be one of the last off the boat if it starts to sink.

A side note: here’s the headline for the Mulvaney admission on the Fox News site:

Evening update: "Mulvaney Claims He Didn’t Say What He Actually Said On Ukraine"

That didn't take long. The above headline is from Talking Points Memo and here's the beginning of their update:

A few hours after confirming a quid pro quo between a conspiracy theory pursued by President Donald Trump and military aid allocated for Ukraine, White House chief of staff Mick Mulvaney reversed himself.

“Let me be clear, there was absolutely no quid pro quo between Ukrainian military aid and any investigation into the 2016 election,” he said in a statement released by the White House.

That’s the opposite of what he said a few hours earlier on Thursday.

Remember: War is peace. Freedom is slavery. Ignorance is strength. 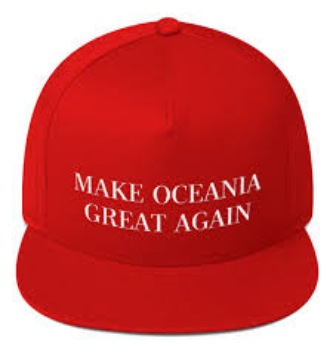 Friday update: today's Wheeling Intelligencer published the first part of an early AP story on the last page of the paper

Our morning paper covered the first-third of an early AP story on Mulvaney's comments. There were no other Trump stories and nothing about Turkey and the Kurds.

Friday afternoon update: and now they monetize it!