Ferns then explains each of the pictures in short posts. For the first picture, he gives the required Hillary quote about closing coal mines before telling us that Ihlenfeld donated to Hillary's campaign. (Imagine, a Democrat donating to a Democrat!) In the second picture, we learn that Obama appointed Ihlenfeld prosecutor and then Ihlenfeld helped Obama eliminate coal jobs. (No evidence is cited on the latter point.) Finally, we learn that Ferns "will never support sanctuary cities inside of West Virginia!" (I didn't know that we were their ultimate destination.)

Okay, Ferns does get to a few issues further down the page but most of his page reminds me of Republican senate candidate Patrick Morrisey's Facebook and Twitter posts with its scare tactics (illegal immigrants will get free health care!) and its Hillary, Obama and Trump references. (Is this what Republicans are running on throughout the state? ) I checked Ihlenfeld's Facebook page, and to these biased eyes, his page appears to be more about his endorsements and positions on issues.

Note on the first two pictures: Ferns needs to get a better Photoshop editor if he's going to continue this unethical practice -- these look photoshopped. I searched and could not find copies of either of Ferns' first two pictures online. I did find this picture of Ihlenfeld which might have been combined with a Hillary picture to produce the above picture: 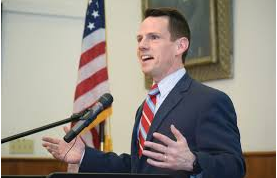