Government handouts: good for me, bad for thee

From a Wheeling Intelligencer editorial on May 7, 2021:

Bottom line: It’s time for Americans to get back to work. It’s high time for Congress to end the supplemental unemployment benefits.”

In the editorial, the Intelligencer makes the argument that continuing unemployment benefits encourage people not to work. Not everyone agrees with that conclusion. For instance, Sean O'Leary, at the WV Center on Policy and Budget, argues that it is not a disincentive:

For the week ending 5/15, WV had 42,153 continued UI claims. The number of WV workers claiming UI benefits is down 40% since January, again undermining claims from Governor Justice and others that workers are staying on unemployment and refusing to go back to work pic.twitter.com/ygJa144UO2

Supporters of the benefits also argue that the payments are not a living wage. As former Labor Secretary Robert Reich points out:

Approximately 40% of jobs pay less than the current average unemployment check of $750 a week.

Folks, we don't have labor shortage. The real shortage is living-wage jobs.

I’ll let readers wade into the economics. I’d like to look at the government assistance (handouts!) that Ogden Newspapers and McKinley’s family have received through the Paycheck Protection Program.

The Small Business Administration, in an effort at transparency, has posted those who received payments from Paycheck Protection Program online here.* Here’s the listings for Ogden Newspapers: 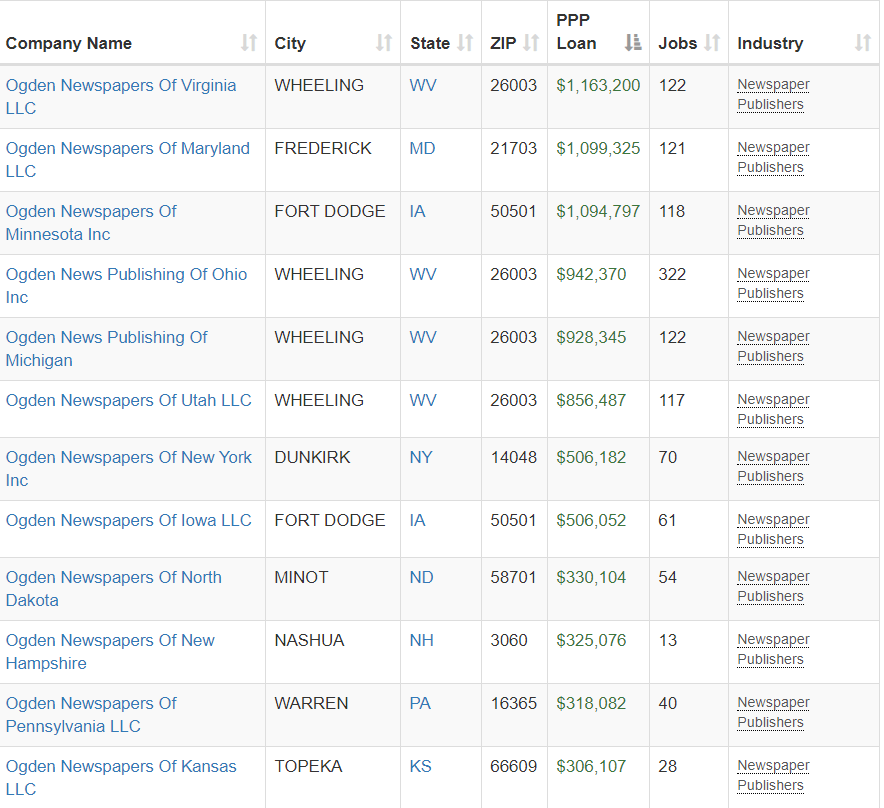 If you do the math, Ogden received almost $8.4 million from the PPP Program.

As for the PPP Program, McKinley's family has done well. When the first PPP numbers were released a year ago, the Intelligencer did a front-page story on the amount that Governor Jim Justice received from the PPP Program but ignored the money that went to the McKinley family’s architectural and financial firms. (I wrote about it here.) Unlike last year’s SBA listings which gave a range, this year’s listings now give the exact amounts. Here are the SBA numbers:

That’s over $1.1 million that went to McKinley family businesses.

Okay, I realize that PPP and unemployment benefits are different programs, but they are both government assistance. (“Government handouts” if you want to use conservative slang.) What I find disconcerting and hypocritical (but not surprising) is that Ogden Newspapers and Representative McKinley have no problem accepting millions from the government but draw the line on that same government helping Americans reach a livable income.

*The SBA database allows you to narrow your search to specific state, city, and business type. For example, you can easily find the amounts received by Wheeling business organizations from automotive repair to full-service restaurants.