Breaking the law and accumulating wealth

Send in the clowns? (Crashing a congressional hearing)

House Republicans ground the impeachment inquiry to a halt for hours on Wednesday, staging a protest at the Capitol that sowed chaos and delayed a crucial deposition as they sought to deflect the spotlight from the revelations the investigation has unearthed about President Trump.

Chanting “Let us in! Let us in!” about two dozen Republican members of the House pushed past Capitol Police officers to enter the secure rooms of the House Intelligence Committee, where impeachment investigators have been conducting private interviews that have painted a damaging picture of the president’s behavior.

On Wednesday evening, various video emerged suggesting that some of the representatives may have taken cameras into a highly restricted area. One that got widespread circulation came from West Virginia representative, Alex Mooney. While watching these videos, Jim White, a contributor at Empty Wheel became curious about how there could be video from inside a restricted area without breaking a law. White found, among other pictures of the event, this one from the New York Times story on the event: 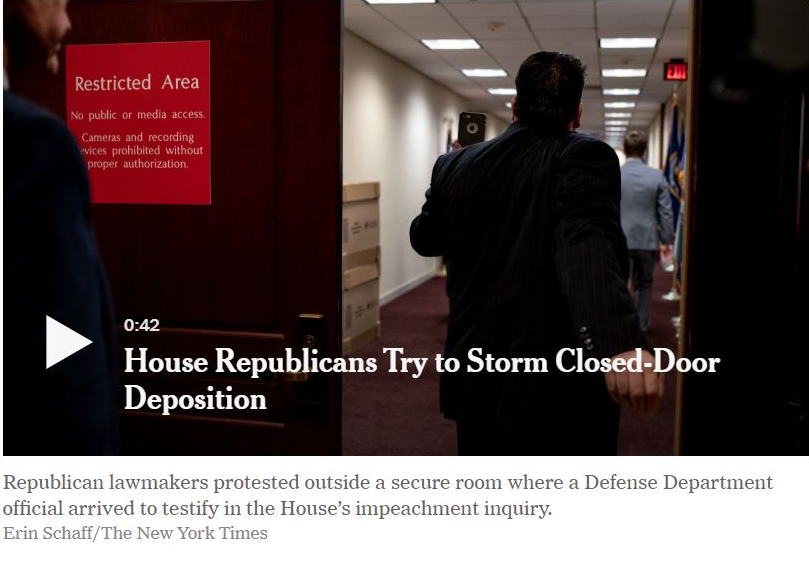 This is clearly a photo taken as stormtrooper Mooney goes through the door with cell phone blazing. Ah, but look at the sign on the other half of the double door: “Restricted Area No public or media access. Cameras and recording devices prohibited without proper authorization.”

Oh my, so when stormtrooper Mooney barged through the first door, he failed to read the sign informing him that he was not to be filming his own heroic action.

In a WV Public Broadcasting story, Mooney disputes that his video was taken inside a restricted area. Additionally, Mooney claimed credit for the idea of storming the hearing:

“I actually said over a week ago at one of our Republican meetings that we should go into those hearings -- and it was very well received among Republicans,” Mooney said. “I'd like to say that was my idea to go into those hearings. Although, it was Congressman Matt Gaetz, who called the press conference and Steve Scalise, our whip, who wasn't at the meeting I was at, anyway, with the president -- who led this effort.”

It sounds like Mooney wants to be, or already is, a rising star in the Trump Party. It should also be noted that WV representative Carol Miller also took part in the Republican protest while our local representative, David McKinley, did not.

Who are West Virginia’s wealthiest representatives?

This morning, USA Today published a list from 24/7 Wall St. of the 76 members of Congress with the highest net worth. Topping the list was Rep. Greg Gianforte of Montana with an estimated net worth of $135.7 million. Second was Rep. Michael McCaul of Texas at $113 million and third was Sen. Mark Warner of Virginia at $90 million. Two of WV’s five congressman made the list: Local Rep. David McKinley was 60th at $4.4 million and Senator Joe Manchin was 72nd at $3.3 million.