Toto, I've a feeling we're not in Kansas anymore

Don’t worry, Dorothy – you’re in West Virginia where the landscape is different, but the politics are the same

MetroNews just released its latest poll by Research America Inc. and probably to no one’s surprise, West Virginians do not support the impeachment of President Trump.

59 percent of West Virginia voters believe Congress should not impeach Trump and that he should remain in office.

The poll shows 34 percent of West Virginians do believe the president should be impeached and then removed.

The numbers are probably accurate: I compared them to Trump’s most recent statewide approval and disapproval numbers from Morning Consult and they are very close: 59 percent approve, and 39 percent disapprove.

Last week I wrote a post about how the Trump administration’s new rules for SNAP (Supplemental Nutritional Assistance Program) benefits will harm thousands of West Virginians. In discussing the changes to SNAP, the Daily Yonder recently published a map that illustrates food insecurity in rural areas: 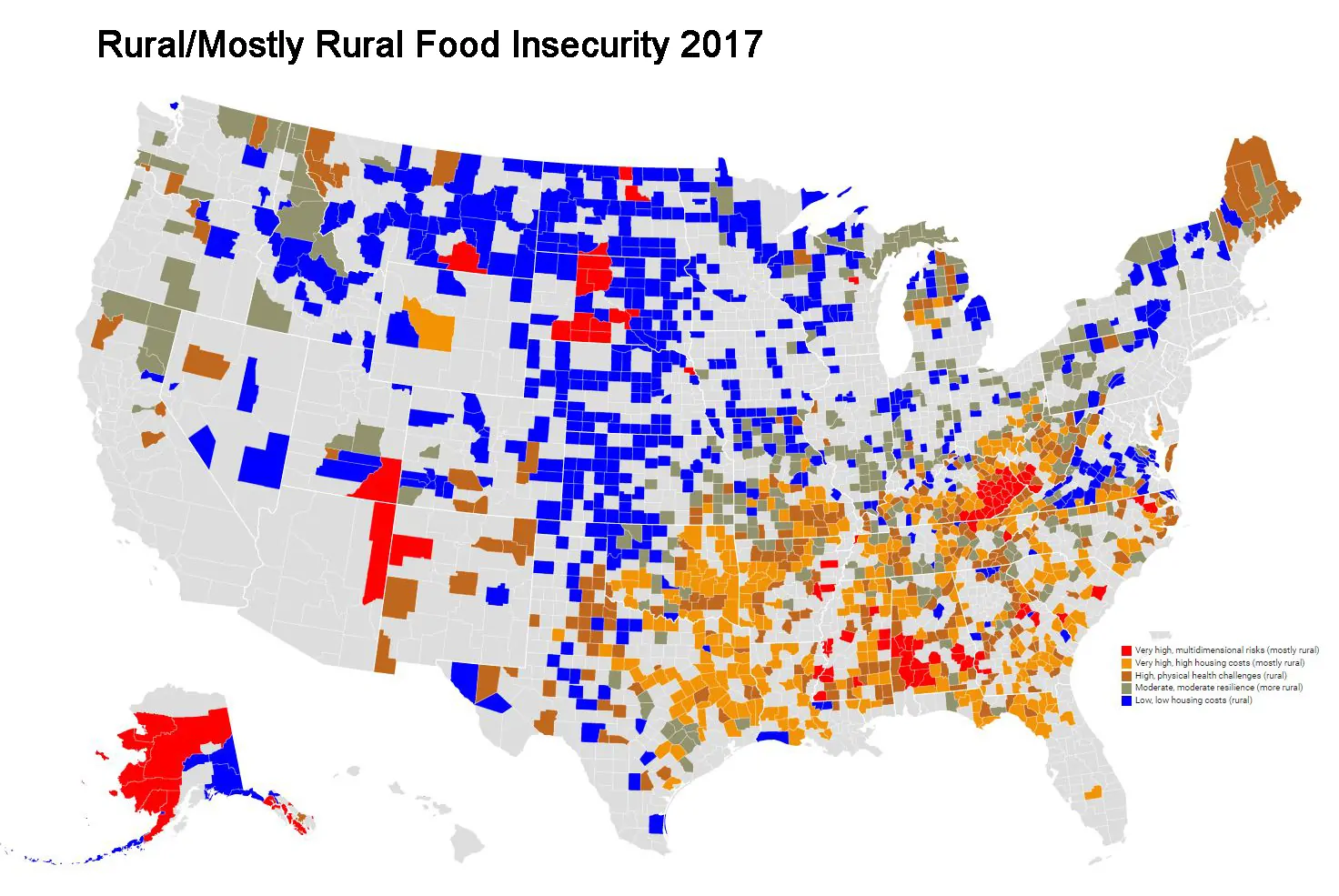 Kentucky would appear to have the biggest problem with West Virginia not far behind. The accompanying Daily Yonder article begins:

[Agriculture] Secretary Sonny Perdue says the expanded requirements for some food-stamp recipients will encourage people to move off the nation’s largest anti-hunger program. But SNAP work requirements are “a mismatch for rural communities” because of structural issues like high unemployment, lack of jobs, and poor transportation, says a critic of the plan.

What the matter with West Virginia?

West Virginia’s support for Donald Trump hasn’t fluctuated much since the state overwhelmingly voted for him in the 2016 election. Nor has the plight of the average West Virginian improved appreciably. And what happened to the return of “beautiful coal” as West Virginia's fragile economy appears to be once again heading southward? Inevitably, the poor in West Virginia will disproportionately suffer as the Trump administration cuts social programs like SNAP. Worse still, Republican leadership from Trump to attorney generals like WV’s Patrick Morrisey could soon win a court battle on Obamacare, ending the program along with the Medicaid coverage that has helped over 100,000 West Virginians. Despite all of that, the state’s voters (including some who have the most to lose) continue to unapologetically support Donald Trump and the conservatives who support and mimic him.

One of the best-selling political books of the mid-2000s was What’s the Matter with Kansas: How Conservatives Won the Heart of America by historian Thomas Franks. In the book, Franks explained why Kansas voters, distracted by issues such as immigration and abortion, frequently voted against their own economic self-interests in order to support Republicans appealing to them with conservative cultural policies. From what I’ve read, Kansas hasn’t changed much since the publication of Franks’ book; if anything, we see similar strategies utilized in additional states. West Virginia would appear to be one of them.