West Virginia, a state President Donald Trump campaigned on reviving, is forecast to have the worst-performing economy in the nation over the next six months, Federal Reserve Bank of Philadelphia data show. . . .

The projections show that the decline in West Virginia will be the most severe since May 2009 during the Great Recession. Moreover, the population has shrunk in all but nine of the state’s 55 counties since the 2010 census and statewide unemployment is among the highest in the U.S.

Here’s the prediction map from the Federal Reserve Bank of Philadelphia: 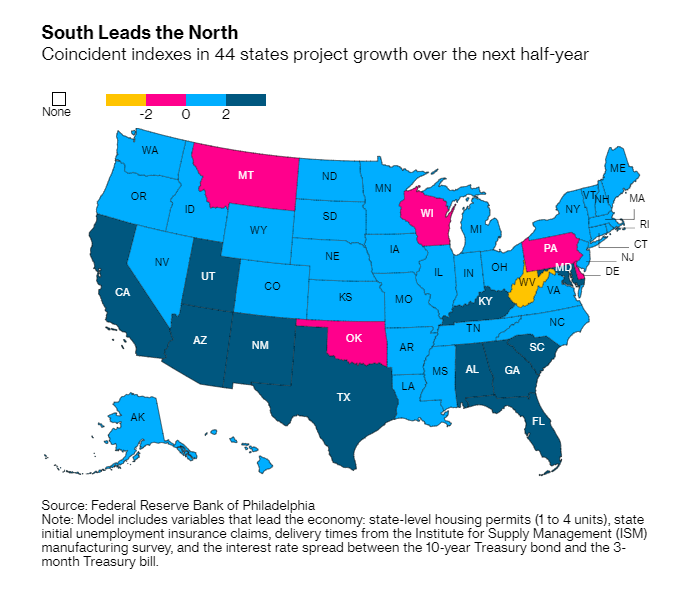 The Trump administration Wednesday formalized work requirements for recipients of food stamps, a move that will cause hundreds of thousands of people to lose access to the Supplemental Nutrition Assistance Program or SNAP.

Who would be affected?

The USDA rule change affects people between the ages of 18 and 49 who are childless and not disabled. Under current rules, this group is required to work at least 20 hours a week for more than three months over a 36-month period to qualify for food stamps, but states have been able to create waivers for areas that face high unemployment.

The new rule would limit states from waiving those standards, instead restricting their use to those areas that have a 6 percent unemployment rate or higher. The national unemployment rate in October was 3.6 percent.

How will it affect West Virginians?

Under the SNAP rule that @USDA finalized yesterday, which will take food assistance away from people who are unable to document sufficient work hours, 10,000 West Virginians in 7,000 households will lose SNAP benefits. https://t.co/ki0TDXn8xJ

According to the study by the Urban Institute, 38,000 West Virginians will lose food benefits if all of the Trump administration’s proposed SNAP changes are endorsed.

(The details are in this article.)