As I suggested would happen in yesterday’s blog post, neither the morning Wheeling Intelligencer nor the afternoon News-Register carried what was the top story on last night’s network news reports and a front-page story on most national newspapers: the FBI’s thwarting of a kidnapping plot against Michigan’s governor, Gretchen Whitmer.

I, however, was not prepared for this afternoon’s editorial page which featured yet another anti-Whitmer cartoon which compared the Michigan governor to an old-fashioned Latin American dictator: 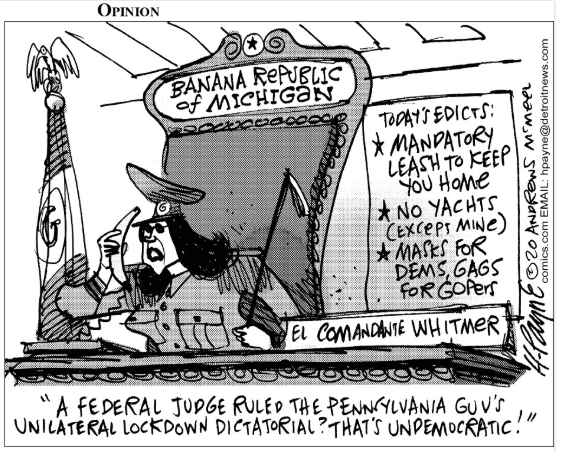 Ogden certainly has the First Amendment right to run a cartoon that is all those adjectives that I used in my title. Should they, however, is another question and obviously one they never consider when the target is an assertive Democratic woman. For almost 30 years, Hillary Clinton was the primary target only to be replaced in recent years by outspoken congresswomen like Alexandria Ocasio-Cortez, Ilhan Omar, and Rashida Tlaib. For our local papers, Governor Whitmer came into fashion when she put into place various measures to lessen the spread of the coronavirus.

It’s one thing to respectfully disagree with Whitmer, as syndicated columnist Andrew Napolitano does immediately below the cartoon. It’s another to personally attack her with outlandish claims quite similar to those made by those who plotted her kidnapping. What more can I say, they are a tasteless Republican rag posing as a newspaper.