The Wheeling News-Register endorses McKinley. Why did they bother?

If your news source for local politics is an Ogden paper, you're probably unaware that he has a Democratic opponent

Does our local congressman have an opponent? Yes, David McKinley does have an opponent, Natalie Cline, although local readers would be hard pressed to find much evidence of her candidacy in an Ogden “newspaper.” In June, our local papers noted that Cline won the Democratic primary and would face McKinley for District 1’s House seat in November. If the paper’s search engine is correct, she has not been mentioned since then. On the other hand, McKinley has been featured in both news stories and op-eds.

Today, a News-Register editorial* endorsed the incumbent: “McKinley Wise Choice on Nov. 3.”
The editorial wants us to examine his “unparalleled record.” (“Unparalleled”? Perhaps, a bit much?) To that end, the editorial asks us to “look at the bills he has introduced just this year.” Okay, I decided to take the editorial’s challenge and so I checked McKinley’s record on the Congress.gov website which keeps track of congressional bills. Like the editorial, the government reference site gives McKinley credit for sponsoring several bills this year. Here is the status of the first bill mentioned in the editorial: 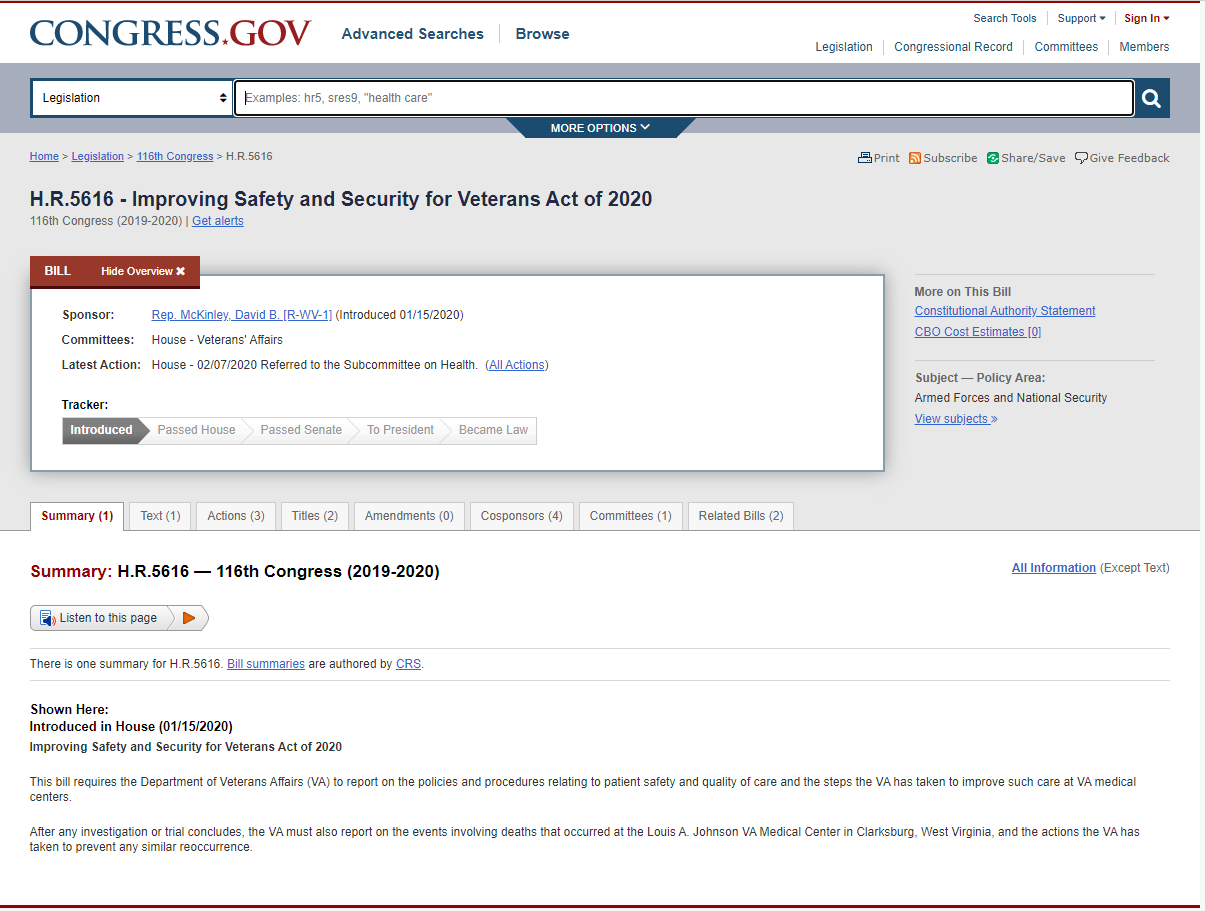 Notice that the bill has not moved since it was sent to committee in February. As I discovered, this is not unusual for a McKinley bill -- I checked the other seven bills that McKinley sponsored this year and none of them have moved past “introduced.” (He’s zero for eight this year – perhaps that’s what the editorial means by “unparalleled.”)

The editorial also praised him for his bipartisanship. I’m guessing that this is a reference to the Lugar Center’s bipartisan ratings for which McKinley usually scores well. As I’ve noted each year when the ratings are released and our local papers praise him, the system rewards co-sponsoring bills with the opposition party regardless of the outcome of the bill. (See here, for example.) In this particular instance, Democrat Jimmy Panetta is a co-sponsor of McKinley’s veteran’s bill cited above and thus both will score Lugar points even though the bill is going nowhere.

A final thought: if our Ogden papers are going to totally ignore his opponent, Natalie Cline, why do they need to inflate and distort his record?

Off-topic: It was good to see in today's Wheeling News-Register that our local Ogden "newspaper" has finally gotten word that President Trump has coronavirus.

*No link -- editorial was not online.