Both are breaking stories: Will we see either of these stories in an Ogden “newspaper”?

The FBI revealed Thursday that it thwarted a plot to kidnap Michigan Gov. Gretchen Whitmer, unsealing charges against six people who it said contemplated a violent overthrow of the government as state authorities charged seven more who they said wanted to attack police and ignite a civil war.

The plotters, according to an FBI affidavit, seemed to be motivated by their belief that state governments, including Michigan’s, were violating the Constitution. One of those involved complained in June that Whitmer (D) was controlling the opening of gyms — an apparent reference to coronavirus shutdown restrictions. But unbeknown to them, the FBI had confidential informants recording many of their discussions, according to the affidavit.

Despite the fact that Gretchen Whitmer is the Governor of Michigan and not West Virginia, our local Ogden editor, Mike Myer, has devoted the better part of three columns to mostly false attacks on her coronavirus decisions. (See here, for instance.) Additionally, the papers have published nine anti-Whitmer political cartoons. (I believe that is eight more than their total for West Virginia’s Jim Justice.) For example: 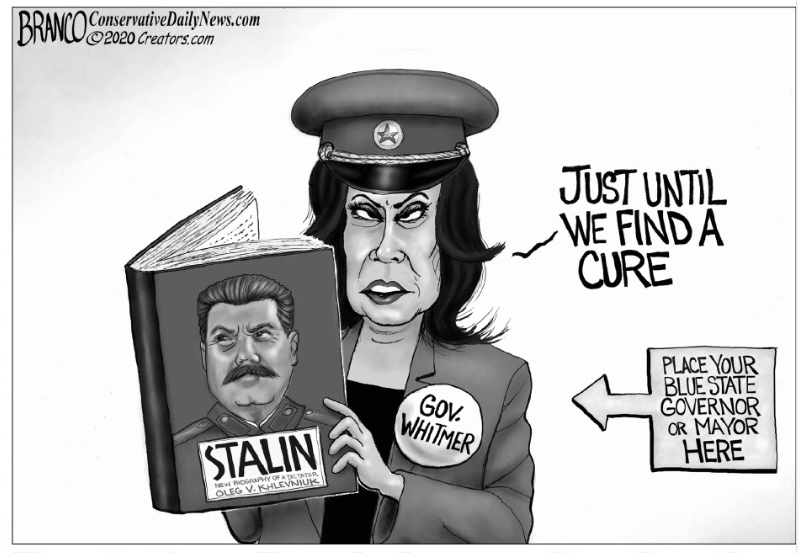 Given the amount of ink that Whitmer has received in our local papers, it will be interesting to see if this major story about Whitmer gets any coverage.

Trump’s “cure” came from the cells of fetal tissue

From the New York Times:

After testing positive for the virus last week, President Trump called an experimental antibody cocktail that he had been given a “cure.” It was developed with cells originally derived from fetal tissue, a practice that he has repeatedly condemned.

As the Times explains:

“Promoting the dignity of human life from conception to natural death is one of the very top priorities of President Trump’s administration,” the Department of Health and Human Services said in a prepared statement.

“Intramural research that requires new acquisition of fetal tissue from elective abortions will not be conducted,” the statement added.

To develop the antibodies, Regeneron relied on 293T, a human cell line once derived from fetal tissue. At least two companies racing to produce vaccines against the coronavirus, Moderna and AstraZeneca, also are using the cell line.

Despite the locals being anti-abortion, I think its pro-Trump editorial bias wins out; I don't expect anything about this on the editorial page. Additionally, Ogden is not likely to provoke any dissonance among Trump supporters so don’t look for it as a news story either.