So much for ethics

A desperation editorial: "Shoe on Other Foot on 'War on Women'" 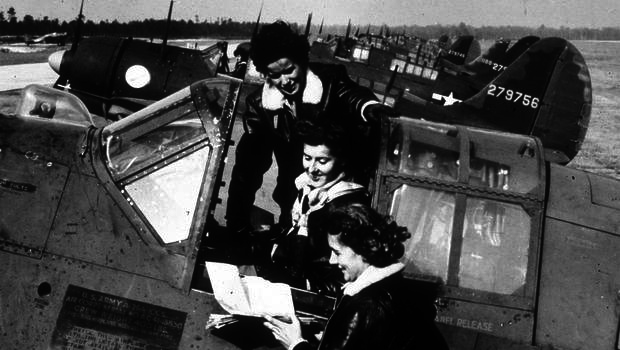 Invoking their favorite metaphor (shoe on other foot), this morning's Intelligencer editorial argues that the Obama administration along with Democrats, are guilty of a war on women. The editorial about honoring the women who were pilots during World War II draws its conclusions without any evidence. In this case the original story which justifies the editorial is not that well-known and was not previously covered by the Intelligencer. This is a fairly common practice for them because it allows the editorial writer to pick and choose whatever is needed (or not needed) to support the editorial's premise and the reader will most likely not be aware of evidence to the contrary.

Here's how the editorial begins:

Members of the Women Airforce Service Pilots group who flew noncombat missions for the military during World War II deserve to be viewed as veterans. A 1977 federal law codified that.

In 2002, under then-President George W. Bush, the decision was made to allow any ex-WASPs who desired to be interred in Arlington National Cemetery.

Okay so far, but then:

(L)ast year, President Barack Obama's administration did something distinctly biased against women: Then Secretary of the Army John McHugh declared there would be no more WASPs buried at Arlington.

Why did the Secretary do this? While the editorial doesn't explicitly state "why," it implicitly suggests that he and the Obama administration are biased against women. (The Intelligencer is ascribing motives here not unlike what it does with its "Obama has a vendetta against West Virginia" attack.) It only takes a minute of your time, but if you research McHugh's action, the reason is very clear: the WASPs did not meet the strict eligibility requirements set up by the Army. Every news sources that I researched reported something similar to what the Christian Science Monitor described:

But in 2015, then-Army secretary John McHugh revoked that right after lawyers determined that WASP program veterans did not meet the Army’s strict eligibility rules for inurnment at the Arlington cemetery, which the Army oversees.

Although the service of these women was highly commendable and deserved recognition, the cemetery said in a statement earlier this year, it did not "reach the level of Active Duty service required" to be inurned at Arlington, where there is limited space.

The Secretary was following the Army's legal advice! Our editorial writer obviously ignores this because it doesn't fit his/her conclusion. Instead the editorial gives credit where it isn't due:

It took an act of Congress, controlled by Republicans, to reverse the policy.

Thank God for Republicans! Except that's not exactly correct, either. The Christian Science Monitor article describes the importance of the online petition drive at Change.org which got it started and the senator who then made the legislation happen:

Sen. Barbara Mikulski (D-Md.) also worked to overturn this decision. She introduced legislation early this year that sought to give WWII women pilots the option of being inurned at Arlington. The legislation passed both the US House and US Senate unanimously, as the Monitor has reported.

So the legislation was sponsored by a Democrat and every Democrat voted for it but the editorial gives the credit solely to the Republicans. It gets worse:

Last week, Obama signed into law a bill allowing ex-WASPs to be interred at Arlington. No doubt the "optics" - the public relations appearance - of vetoing it was a consideration.

As with previous editorials, when Obama does the right thing, his motives are impugned. If there is "no doubt," could we see just one piece of evidence to support the assertion that the president was considering a veto? Just one. Obviously there isn't any because it would have been used. Finally, the editorial takes one last shot at Obama by arguing:

Obama could have rescinded McHugh's policy by issuing an executive order of the kind he is so fond of using. He chose not to do that.

Can this editorial be any more hypocritical? A month seldom passes without an editorial or Myer column that tells us how illegal it is for our "imperial" president to issue executive orders but now it's what he should have done?

Completing the editorial, the final paragraph reiterates the lie used earlier that it was the Republicans who did the right thing and then tosses out another lie about liberals:

In this case, it took the GOP Congress to do the right thing for a group of patriotic, often courageous, women the liberals slighted.

This editorial:
-- leaves out numerous critical details of what happened leaving the reader with insufficient information to make a reasoned judgment,
-- attacks the motives of the president and others without a single piece of support for its assertions,
-- lies that it was solely the Republicans who were responsible for the passage of the WASP legislation,
-- criticizes the president for not taking the type of actions that it has previously attacked him for taking.

The Intelligencer and News-Register have committed these ethical sins previously but no editorial has previously done them so often in so few words. (Only 223 words.) I can say without any doubts that this is the most unethical editorial that I have read in the 27 months that I have been doing this blog.

And for those of you who are new to The Wheeling Alternative, this is one of the reasons why I refer to the Wheeling Intelligencer and the Wheeling News-Register as "newspapers."