Yesterday, Media Matters published a study that examined the news content of twenty local television stations in five markets to see how well they were covering the Senate's tax reform bill. Their analysis:

found that key provisions of the tax bill put forth by Senate Republicans were all but omitted from local media coverage of the plan in Portland, ME; Phoenix, AZ; Madison, WI; Anchorage, AK; and Nashville, TN. Additionally, while local media widely reported that the bill would repeal the Affordable Care Act’s (ACA) individual mandate, they neglected to note that doing so would raise premiums and increase the number of uninsured people.

As bad as that is, their findings for the Sinclair-owned stations were much worse: 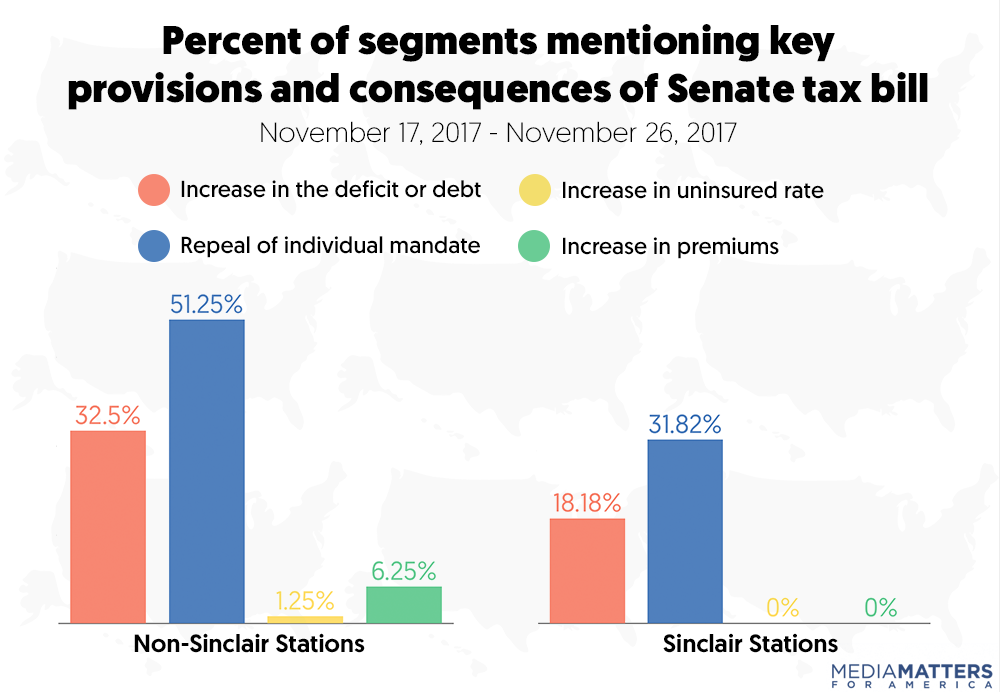 This study comes as sources suggest that Sinclair has reached a compromise with the Justice Department to allow Sinclair to become the largest television station owner in the United States:

Sinclair Broadcasting is close to accepting a remedy proposed by President Trump’s Department of Justice to allow its $6.6 billion buyout of Tribune Media to gain regulatory approval, The Post has learned.

The feds want Sinclair, whose 193 TV stations spread over 89 markets makes it the largest TV station owner in the country, to sell 13 Tribune stations, sources said.

Sinclair is hoping to get that number down to 10 stations, sources said — but is ready to accept the Justice Dept.’s offer to get the deal done.

Local television news does a poor job of keeping us informed. Pro-Trump Sinclair Broadcasting's growth will only make that worse.