She’s “still the same old politician she used to be”

Yesterday, the Republican Senate unveiled its new coronavirus aid bill. One of the key provisions in the GOP plan deals with the jobless benefits provided to the unemployed:

In the new GOP plan, Senate Republicans propose cutting weekly emergency unemployment benefits from $600 to $200 until states can bring a more complicated program online. The $600 weekly jobless benefit expires in a few days, and House Democrats have proposed extending it until January because the unemployment rate remains very high.

Senate Republicans want to put the $200 in place until states can implement a new approach that would pay the unemployed 70 percent of the income they collected before they lost their jobs. The states are supposed to phase in the new formula within two months under the new GOP plan, though it’s unclear how cumbersome that process could prove to be.

Some employers and some Republicans have wanted to cut unemployment benefits as Marketwatch noted earlier today:

But employers and some members of the Trump administration have argued that it has also acted as a disincentive for many people to go back to work, particularly those who were earning relatively low wages before the countrywide closure of businesses.

It’s important that we continue focusing on getting people back to work in a safe way. That’s not going to happen if people can make more money on unemployment than they can working. ⬇️ pic.twitter.com/fkvkeIFyu8

Senator, where are all these jobs? The most recent unemployment rate for West Virginia was 10.4%. As USA Today noted last week:

The labor market is facing a net loss of 14.7 million job losses from the coronavirus recession. Jobless claims remain historically high and permanent job losses are growing, a troubling sign for the labor market. In June, the number of people who have permanently lost their job rose by 588,000 to 2.9 million.

More specifically, from Sean O’Leary and the West Virginia Center on Budget and Policy:

The problem is a lack of jobs, not overly generous benefits. Last month there was only 1 job opening for every 4 unemployed workers pic.twitter.com/5SePPA5oL5

But Capito and the Republicans see the higher benefits amount as a disincentive to work rather than a family necessity or economic stimulus.

Analysis suggests that this Republican plan will mostly impact the poor. See, for instance, a widely-cited article from Yahoo News:

And it would certainly worsen the housing crisis – especially in West Virginia. From CNBC:

Massive unemployment has left more than 40% of renter households at risk of eviction, according to a new analysis by global advisory firm Stout Risius Ross.

Some states will be harder hit than others, Stout found.

For example, nearly 60% of renters in West Virginia are at risk of eviction, compared to 22% in Vermont. 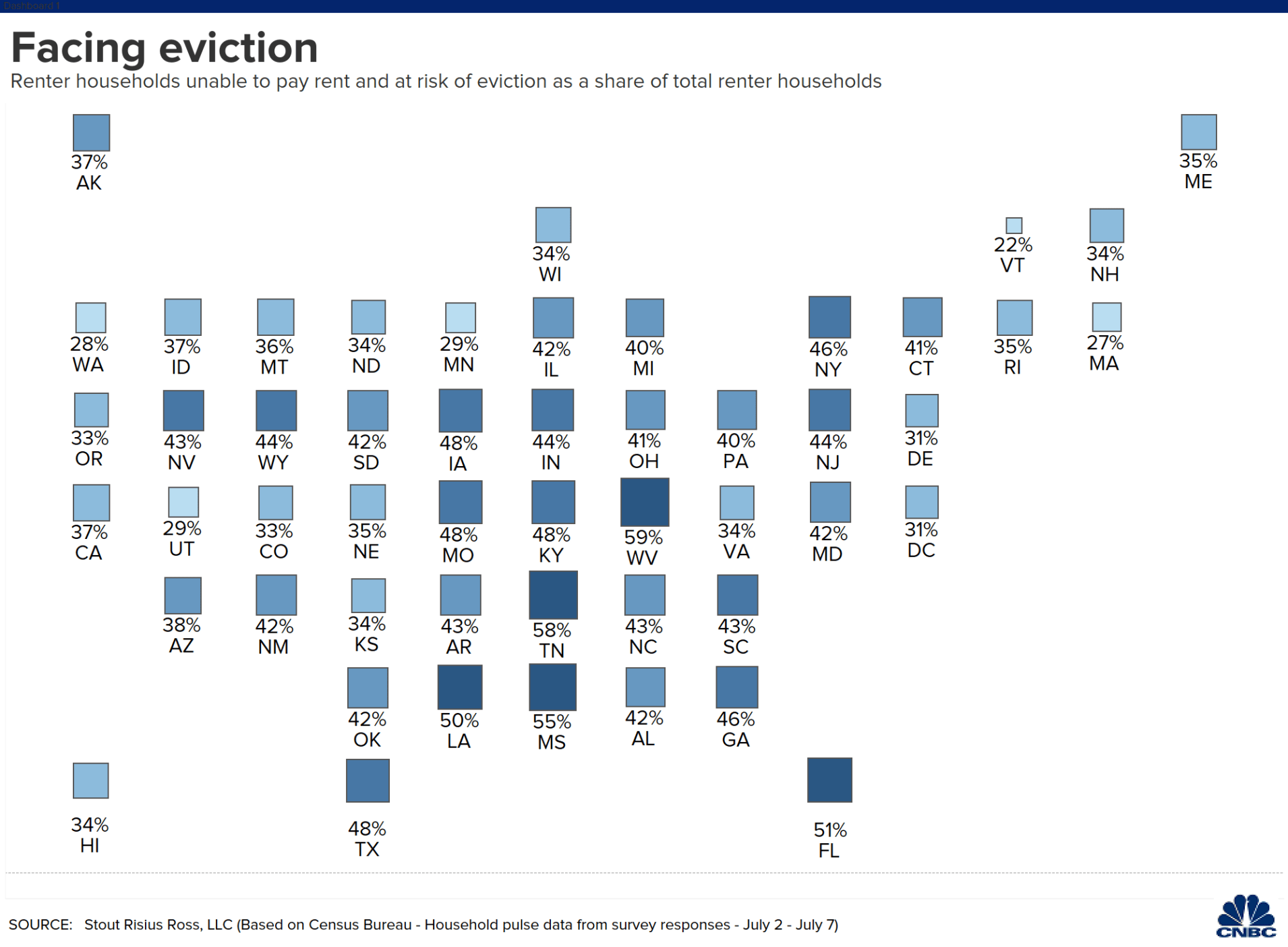 (Note that West Virginia is the highest.)

On the other hand, some would benefit from the Republican plan. For example, the military, as noted by Common Dreams:

And my personal favorite from MSNBC:

In the Republican aid package, the "three-martini-lunch deduction" made the cut. Increased food-stamp benefits did not.

(Business lunches would become 100% deductible under the Republican plan.)

Senator Capito worries about disincentivizing the poor but wants more benefits for the rich, the military, and business. Her points remind me of a campaign-speech-posing-as-a-lecture I heard her give six years ago as part of the BB&T Bank/West Liberty University right-wing speaker series. At the end of her speech, Capito was asked about the the obvious benefits to over a 100,000 West Virginians that Obamacare and the expansion of Medicaid provided. Her response was telling and, most-likely, truthful: she did not know anyone who thought that Obamacare was a good idea. My conclusion: Capito’s still the same old politician she used to be. (With props to the Eagles.)