More on Senator Manchin and the For the People Act 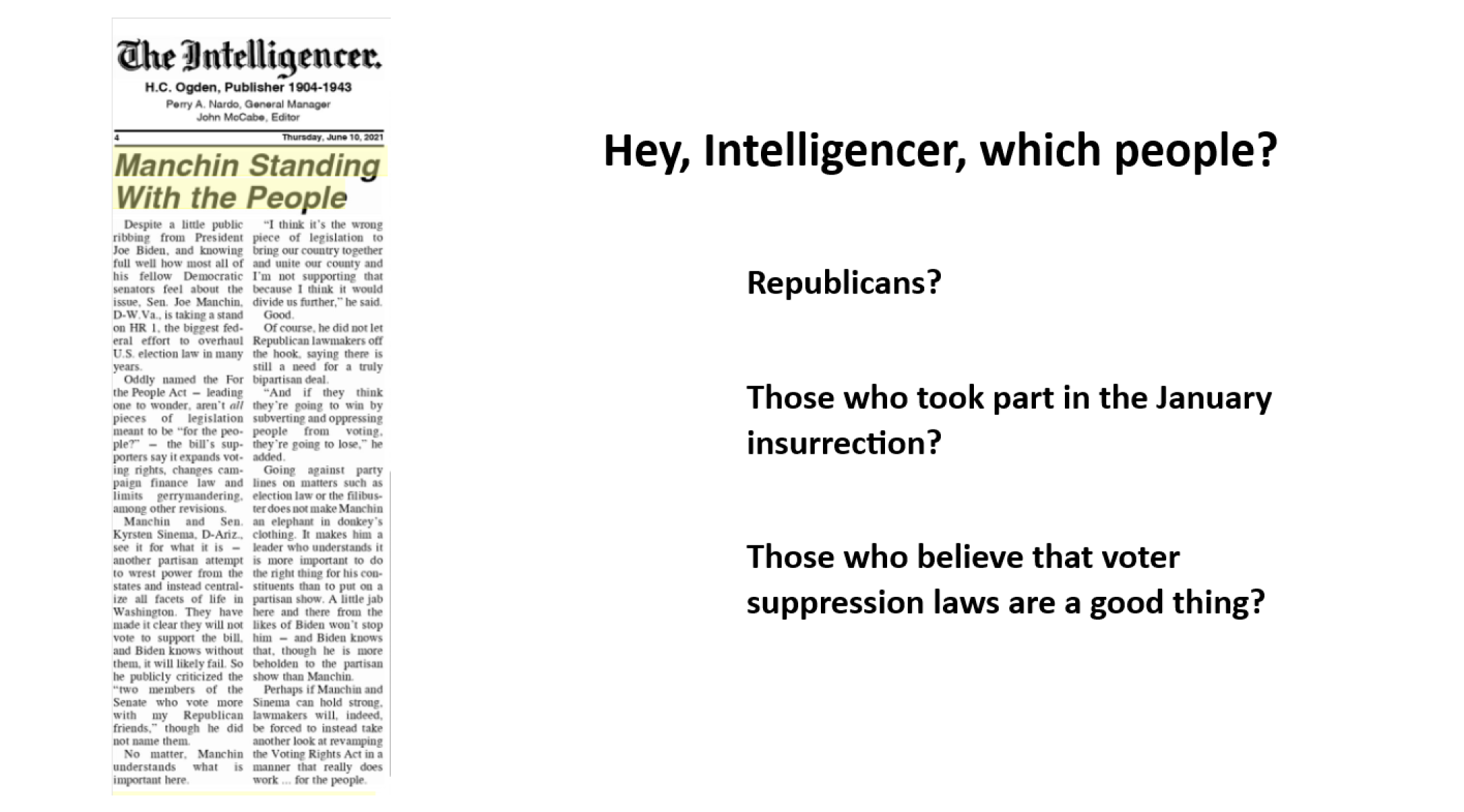 Thursday's Ogden-Wheeling editorial asserts that WV senator Joe Manchin, by opposing Democratic efforts to pass the For the People Act, is standing with the people. In doing so, the editorial frames the debate around federal vs. state control of elections:

Manchin and Sen. Kyrsten Sinema, D-Ariz., see it for what it is - another partisan attempt to wrest power from the states and instead centralize all facets of life in Washington.

No, the Intelligencer is putting words into Manchin's mouth -- if you read his Sunday op-ed piece about the legislation in the Gazette-Mail or anything else on this subject by the senator, he has stated that his opposition is because of its lack of bipartisanship.

But what do West Virginian's think about the bill? This is the only poll I could find:

"All of it has way over majority support among WV voters, but Joe Manchin says he won't vote for it because Republican senators won't vote for it no matter why," @maddow says on new polling that shows WV voters support the For The People Act. https://t.co/2XlwcIzbbm

(Note -- I do have some reservations about the poll: ALG calls itself a "progressive public-opinion research firm" (bias) and I would additionally question whether the "don't know" is realistically less than 10%. On the other hand, yesterday's editorial asserts that Manchin is "standing with the people" with no evidence whatsoever.)

New data: GOP state legislatures have passed 24 new laws in 14 states this year making it easier to overturn elections, interfering with election administration & criminalizing efforts by election officials to make it easier to vote. This is terrifying https://t.co/nM2Hc9DQG0

Ron Brownstein also documented this in a similar Atlantic article:

While Senator Joe Manchin is demanding that both parties agree on any further federal voting-rights legislation, a new study quantifies how completely Republicans have excluded Democrats from the passage of the restrictive voting laws proliferating in red states.

In places such as Florida, Georgia, Arizona, Iowa, Kansas, and Montana, the most restrictive laws approved this year have passed on total or near-complete party-line votes, with almost all state legislative Republicans voting for the bills and nearly all Democrats uniting against them, according to an analysis of state voting records provided exclusively to The Atlantic by the Brennan Center for Justice at NYU.

That pattern of unrelenting partisanship has left many state-level Democrats incredulous at the repeated insistence by Manchin, a conservative Democrat from West Virginia, that he will support new federal voting-rights legislation only if at least some Republican senators agree to it.

And why would they lose, Senator? Who is going to stop them? You and those phantom 10 Republican senators? I'll bet they're really scared!