Perspectives on King Day from Senator Manchin and Ogden Newspapers

Dr. King changed our society for the better and provided us a vision for what America could be, if we work together. My grandparents taught me that if you can count your blessings you can share your blessings, and Dr. King taught us that the values of love, unity and forgiveness are some of the most important values in our society. Let us all remember Dr. King’s memory by reaching out to our fellow West Virginians to create unity and share our blessings during these difficult times.”

Critics have since pointed out that the senator continues to miss the importance of the right to vote:

Martin Luther King III to Arizona’s Kyrsten Sinema and West Virginia’s Joe Manchin: "If you can deliver an infrastructure bill for bridges, you can deliver voting rights for Americans. If you do not, there is no bridge in this nation that can hold the weight of that failure." pic.twitter.com/LtIT3xCF0L

“I think the tragedy is that we have a Congress with a Senate that has a minority of misguided senators who will use the filibuster to keep the majority of people from even voting.“ - MLK

59 years later, we are facing the same tragedy. pic.twitter.com/xEgLTTgVTC

(The King reference: "I have almost reached the regrettable conclusion that the Negro's great stumbling block in the stride toward freedom is not the White Citizens Councilor or the Ku Klux Klanner but the White moderate who is more devoted to 'order' than to justice.")

Manchin, as he has frequently done on voting rights, is ignoring his critics.

Saw this and our local Ogden “newspapers” came to mind:

Don’t quote MLK one day a year and think you’ve done enough. Actually listen to and read his words, and actually be supportive of Black people during the other 364 days of the year.

And it features this beginning:

One wonders, as we look back on the tumultuous, divisive, harrowing year from which we have emerged, what kind of voice the Rev. Dr. Martin Luther King Jr. might have brought to the discussion as we try to heal.

Yes, it’s time but wasn’t it time in 2021 when the Intelligencer editorial told us that it was

And guess what? Coincidentally, the year 2020 was also a “tumultuous, divisive, harrowing year.” And that same editorial made the rounds last year in other Ogden papers. (See here and here, for examples.)

Curious, I checked back on the Intelligencer’s King Day editorial from 2020. It was titled:

That Ogden editorial showed up today here and here.

Yes, for Ogden, nothing says treating Dr. King’s message seriously like recycling two-year-old editorials and then ignoring King’s message for the rest of the year.

Justice says just like Babydog, who loves everybody, that's what MLK wanted for all of us. To be kind of love people. 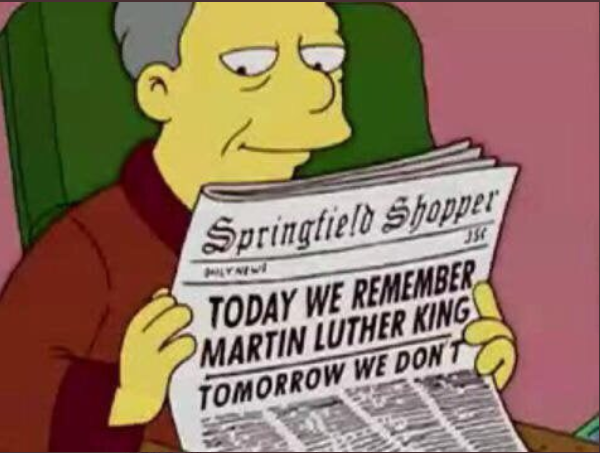 *My hunch is that Manchin released his statement three days early figuring that if he released it today, he would call attention to his obstructionism on voting rights. I don't think that it worked – people continue to contrast Manchin's position on voting rights with Dr. King's.