Some different points of view of the Republican senator

Had failed presidential candidate @MittRomney devoted the same energy and anger to defeating a faltering Barack Obama as he sanctimoniously does to me, he could have won the election. Read the Transcripts!

Later, at the National Prayer Breakfast*, Trump continued his attack:

"I don't like people who use their faith as justification for doing what they know is wrong," Trump said Thursday at the National Prayer Breakfast, a typically apolitical event.

That statement was a not-so-veiled reference to Romney, who said on the Senate floor ahead of his vote: "As a Senate-juror, I swore an oath, before God to exercise impartial justice."

Similarly, here's Trump at his victory celebration early this afternoon:

"And then you had some that used religion as a crutch. They never used it before," Trump said. "But you know it's a failed presidential candidate, so things can happen when you fail so badly running for president."

This was today's editorial cartoon by Steve Breen of the San Diego Union-Tribune. I found it in the Standard-Examiner of Ogden, Utah (the state that Romney represents as senator): 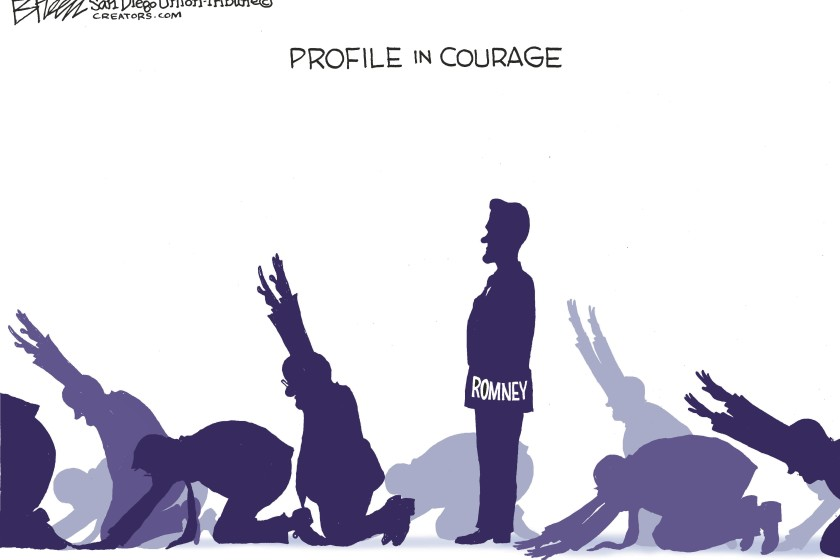 What makes this interesting is that the Ogden Standard-Examiner was purchased in May 2018 by Ogden Newspapers. As an Ogden paper, the editorial page predictably features the usual stable of Ogden right-wingers (Jonah Goldberg, Adriana Cohen) which is why I was surprised to see to see this cartoon.

I thought the best reaction was by Steven Colbert on last night's "The Late Show":

*I thought that the best comment on Trump's appearance at this morning's prayer breakfast belonged to Charlie Pierce:

As dozens of attendees stared into their fruit cups and longed for the sweet release of the Rapture, the president continued to read from Paul’s Second Epistle to the Hannitites.