Did I miss something on health care?

So what is President Trump doing today?

President Donald Trump is on the golf course at his club in Virginia today, his 376th day at a Trump property and 283rd day at a golf club as president, per @KevinBohnCNN's official count. Spotted on the links by @petermorrisCNN: pic.twitter.com/T4m1prrvc1

And as several people have pointed out, there’s a tweet for everything (this one works on a number of levels):

"@Kalozap: Obama's mind, IsIs, ebola, etc.... and then thinking, boy I wish I was on the golf coarse. What should I wear on the Links"

In the meantime, the extra unemployment benefits expired last night at midnight

Giving credit where credit is due:

The GOP had the HEROES bill for 2 months. They didn’t even unveil their paltry response until Monday, then ran the clock out to extend benefits to laid off working families. Trump did nothing to move things. We’re in this mess because the GOP played chicken and Trump played golf.

a deal will likely happen before the congressional recess begins on Aug. 10, even if it means passing a temporary measure until lawmakers return to the Capitol.

Capito might want to check with Mitch McConnell, the Senate Majority Leader. From The Hill:

Senate Majority Leader Mitch McConnell (R-Ky.) said Friday that more than a third of Republican senators will not vote for any coronavirus relief package, underscoring division with his caucus.

"I think there are 15-20 of my guys that are not going to vote for anything. . . . It's a statement of the obvious that we will not have everybody on our side," McConnell told WHAS, a Kentucky radio station.

Robert Reich summed this up well:

When Trump and Republicans in Congress want to pass tax cuts for the wealthy and corporations, they ram legislation through at lightspeed.

But when it comes to helping the American people, they ditch town. https://t.co/EMeoBEOCIJ

In other Senator Capito news

A screenshot from Ammoland: 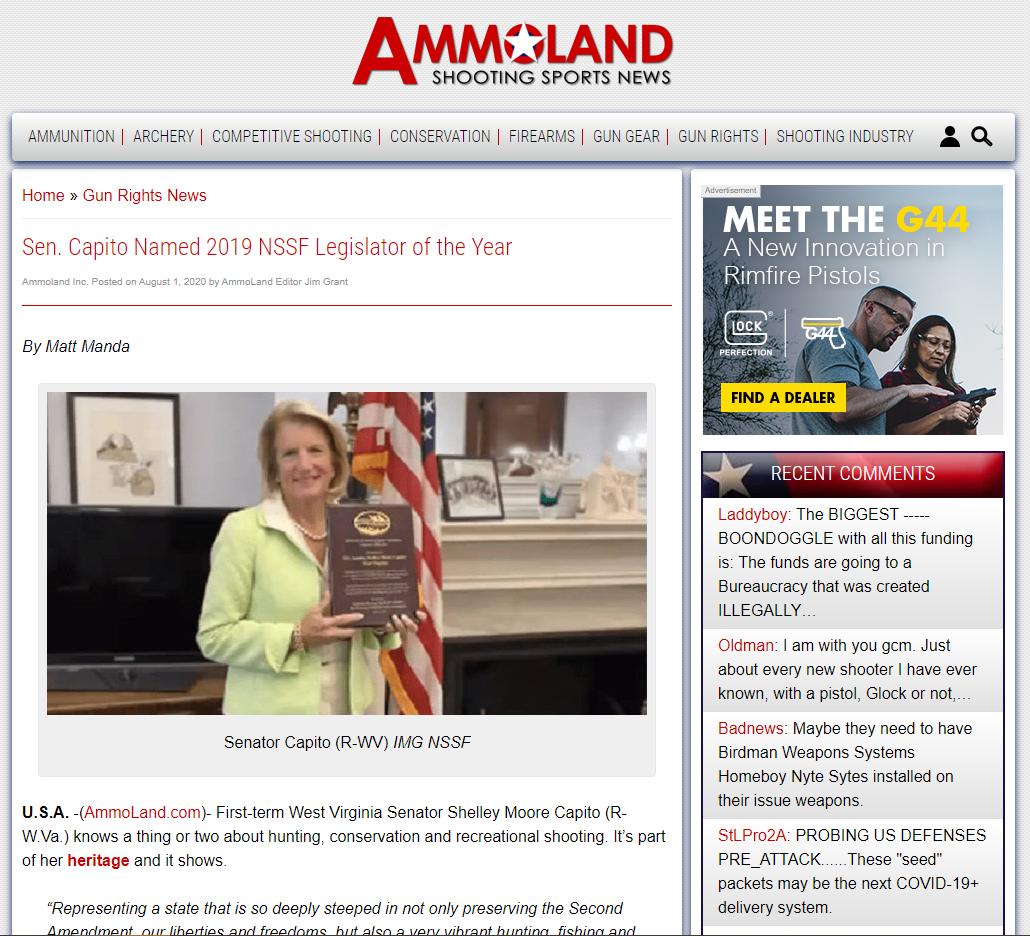 From the award ceremony:

Keane and Sen. Capito turned the conversation from past legislative wins to concerns ahead as America navigates the coronavirus pandemic and concurrent attacks on the Second Amendment. As Congress debates the next COVID relief package, Paycheck Protection Program (PPP) loans, tax relief and limited liability protections are all front and center for America’s small businesses and manufacturers to help get people back to work safely. But the firearm industry particularly faces unique, non-legislative attacks, like politically-driven banking and social media discrimination.
“This is an indication of strategy on the part of anti-Second Amendment folks to be able to find a different way to disrupt what the American people want,” Sen. Capito stated. “That’s the will of the American people. They can’t stop that because of individual rights that are guaranteed . . . . so they try to find other methods.”