This one has scary implications

Three weeks ago, our local Ogden “newspaper” editor, claimed that Michigan’s Gretchen Whitmer had significantly restricted the civil liberties of her constituents. Of course, if you checked out his claims, none were true. (See here.) Today, there is more of the same in the Wheeling News-Register editorial cartoon: 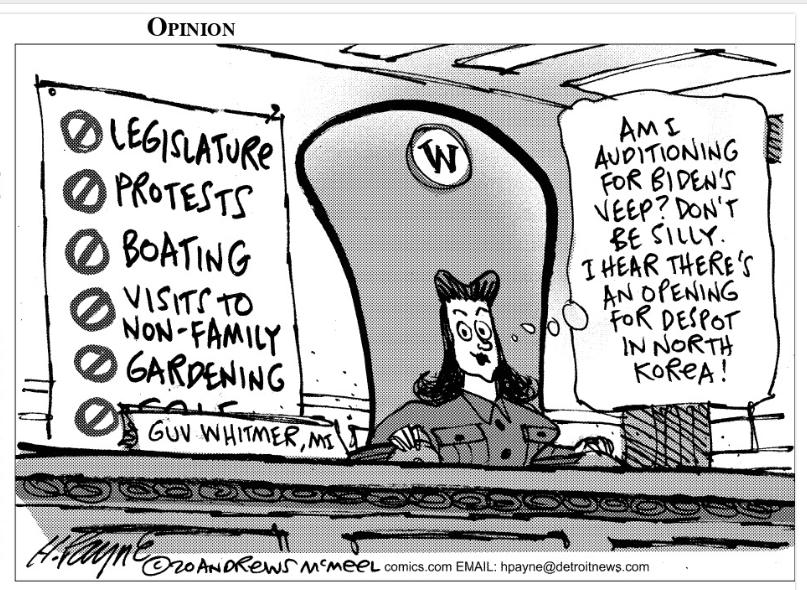 Governor Whitmer and the anti-lockdown protests

The last anti-lockdown protest in the Michigan capitol was on April 30. You may have seen some of the photos of the armed protesters in the Michigan legislature. Here is one from Michigan state senator Dayna Polehanki:

Directly above me, men with rifles yelling at us. Some of my colleagues who own bullet proof vests are wearing them. I have never appreciated our Sergeants-at-Arms more than today. #mileg pic.twitter.com/voOZpPYWOs

Note – according to the Detroit News:

The state has long allowed guns inside the Capitol building — a policy that's previously drawn criticism from Democrats.

The next protest is scheduled for this Thursday and today the Michigan Capitol Commission refused a Democratic request to ban the weapons.

Today, the Detroit Metro Times published an investigative report on some of the Facebook groups organizing against Governor Whitmer:

Dozens of angry Michiganders, fueled by conspiracy theories and disinformation about the coronavirus, are promoting violence and mobilizing armed rallies against Gov. Gretchen Whitmer on Facebook, in violation of the social media company’s policies.

Metro Times gained access to four private Facebook groups that can only be seen by approved members. The pages, which have a combined 400,000 members, are filled with paranoid, sexist, and grammar-challenged rants, with members encouraging violence and flouting the governor’s social-distancing orders.

Here is a sample of what they found:

Assassinating Whitmer is a common theme among members of the groups. Dozens of people have called for her to be hanged.

“We need a good old fashioned lynch mob to storm the Capitol, drag her tyrannical ass out onto the street and string her up as our forefathers would have,” John Campbell Sr. wrote in a group called “People of Michigan vs. Gov. Gretchen Whitmer,” which had nearly 9,000 members as of Monday morning.

Steve Doxsie had the same idea: “Drag that tyrant governor out to the front lawn. Fit her for a noose.”

“Either President Trump sends in the troops or there is going to be a midnight lynching in Lansing soon,” Michael Smith chimed in.

“We removed one group for violating our policies and will remove any other violations as we continue our review,“ a Facebook spokesperson tells Metro Times.

As I was completing this post, I noticed that Governor Whitmer has responded to the death threats. From the Detroit News:

Gov. Gretchen Whitmer called on Republican lawmakers Monday to denounce death threats against her on social media, while revealing that her goal is to test 450,000 Michigan residents for COVID-19 during May.

Whitmer made the comments during a press conference Monday afternoon. She was asked to react to death threats levied against her on private Facebook pages that are only available to their own members.

The Democratic governor said "concerning isn't a strong enough word" and said she was "disappointed" the Michigan Capitol Commission didn't act Monday to restrict guns inside the Capitol.

"This could be avoided if Republican leadership in the Legislature would step up and denounce that kind of activity, if there was anyone on the other side of the aisle that would do that," Whitmer said. "People can have any opinion they want but to threaten someone else is beyond the pale."

Will Michigan Republicans step up and denounce this activity? Of course not -- it is likely happen about the same time that our local Ogden “newspapers” demonstrate they prefer truth rather than disinformation in their editorials, columns and cartoons.