The Intelligencer praises Representative McKinley on the 45Q tax credit

This morning's Wheeling Intelligencer editorial, "Repairing Damage to Coal Industry," heaps lots of praise on Representative David McKinley for his supposed work to make sure that the 45Q tax credit was included in the final budget:

McKinley, R-W.Va., is being given credit for much of the initiative that resulted in funding for a key program being included in the two-year budget agreement in Congress. It is the 45Q tax credit, aimed at developing and deploying carbon capture technology. That is crucial if coal-fired power plants are to meet limits meant to curb climate change.

It certainly looked impressive and so I googled "45Q tax credits" + "budget agreement" to learn more about the matter and specifically, who was giving him credit. The search yielded 47 links. In examining many of the links I learned a lot about the tax credit but unfortunately did not find any mention of our representative. Perhaps I was just choosing the wrong links and so I narrowed my search to "45Q tax credits" + "budget agreement" + "David McKinley." Here are the search results at 4 PM: 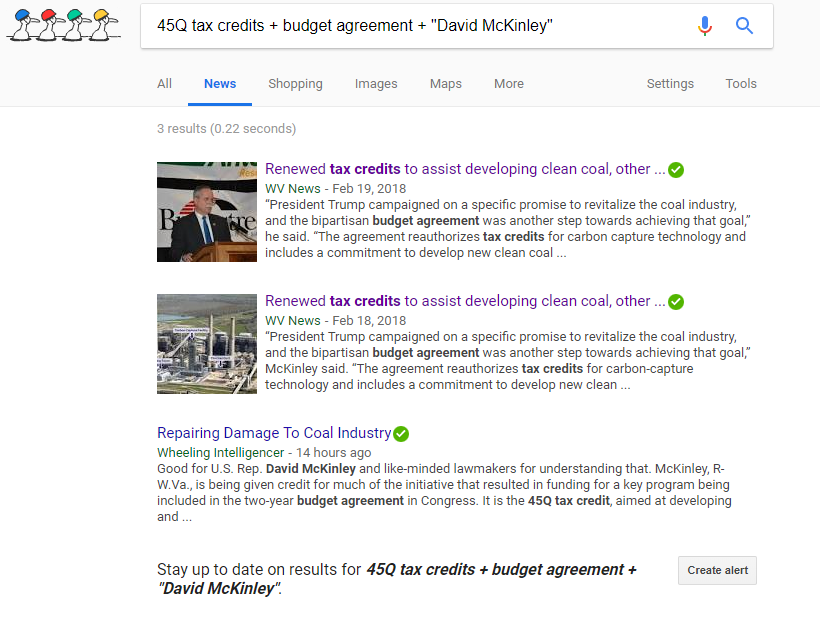 Yes, an article in WV News, a rewrite of that article a day later, and this morning's editorial. Where did all this praise come from? I next checked McKinley's House of Representatives web page and found a press release that mentioned all of the above:

The press release tells us all of the many actions that the congressman supposedly took and then concludes:

Because of McKinley’s leadership on the issue, the 45Q tax credit was included as part of the bipartisan budget agreement.

So. . . . McKinley's press release tells us that McKinley deserves the credit. No one else seems to think so but that's irrelevant -- the Ogden papers now praises him for the tax credit. Additionally, the press release also includes compliments from the executive directors of "stakeholders" like ClearPath Action and the Coal Utilization Research Council. (Just a thought, why aren't consumers who care about the environment ever called stakeholders?)

I'm sure that this is just the beginning of the editorials and Myer columns that are designed to reelect David McKinley. Additionally, Mike Myer will, at some point, remind us once again about how the congressman forced the EPA to back down on a coal ash decision -- something that I have spent far too many hours of my life trying to find. (See here for instance.) I've concluded that it was greatly exaggerated or, more likely, simply made up. As today's editorial demonstrates, it doesn't matter -- it's all about getting McKinley re-elected.