Loan forgiveness: Good for me, not for thee

President Joe Biden announced Wednesday that his administration will forgive $10,000 in student loan debt per federal borrower earning under $125,000 per year during the pandemic. . . .
Biden also announced that Pell Grant recipients who earn less than $125,000 per year during the pandemic—$250,000 for married couples or heads of household—will have up to $20,000 in debt erased.

I figured that it would only be a matter of days before one of our Ogden “newspapers” attacked the president’s action editorially or with an op-ed column. I didn’t have to wait long – this weekend’s Wheeling News-Register followed through with “This Is Not Forgiveness” by David Harsanyi.

I didn’t recognize Harsanyi and his credentials were not listed. (My experience has been that missing credentials is usually not an accident on Ogden’s part.) With research, I found that David Harsanyi is senior editor at the Federalist and a syndicated columnist. (As readers are probably aware, the Federalist Society is very conservative, and it has been extremely influential in the Trump/Republican Party. For example, Trump’s three Supreme Court justices came from their list.) Most of Harsanyi’s attacks are predictable and while Hansanyi does cite some statistics in his column, he’s not adverse to using the right-wing’s newly-minted attacks:

• “Now, if you’re opposed to repaying some stranger’s loan, that’s too bad. A new batch or IRS agents will be there to ensure that you do."

• The plan “is little more than a vote-buying scheme for affluent millennials.”

Please be aware, however, that the Federalist Society and Ogden Newspapers are not against all federal loan forgiveness

Despite its strong conservative/libertarian, even anti-government values, the Federalist apparently had few problems accepting government covid aid in the form of PPP loans. They were also willing to meet the federal government’s requirements to have those loans cancelled. From Propublica:

And similarly, here is Ogden Newspapers’ total of loan forgiveness: 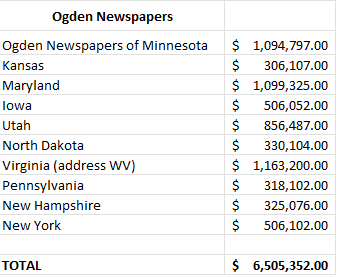 And from West Virginia’s congressional delegation

I did not find much from Miller on the topic but on Wednesday, she retweeted this comment from Republican representative Mike Kelly:

(I wonder how those plumbers and carpenters feel about paying off the loans of rich members of Congress?)

And while our local congressman, David McKinley no longer owns the business, McKinley and Associates had a loan of $362,297 forgiven in December 2020. I could not find any reaction by McKinley to Biden’s announcement. Last January, WTRF did ask him about student loans:

Congressman David McKinley argues that lawmakers could take a more targeted approach, instead of the nationwide moratorium on payments.

He suggests that the loan extension could be an incentive for those who will take jobs like teaching and medicine, in areas that desperately need them.

If they would do that, I would agree deferring their loans or forgiving their loans could be an appropriate way to get people to stay in West Virginia in areas that are underserved. So I think there’s some merit there. But just a blanket statement like this, I’m not sure I agree with that.

And finally, there is Alex Mooney. Mooney does not appear to be connected to any PPP funds. He has been critical of Biden’s action, however. Some of his tweets on the subject are interesting for what he has chosen to leave out. For example, there is this Mooney tweet about where student loans are most concentrated:

“Americans across the country are counted in the ranks of student loan borrowers, but there are some areas that have a concentration of people with high balances. Washington, D.C., takes the top seat, with the average federal student debt per borrower at $55,000.”

Mooney was "shocked" that it was Washington DC? My hunch is that this tweet was designed to elicit outrage from his followers. So why did Mooney single out D.C. for special scorn? Hmmm. Of course, Mooney does not explain the reason for D.C.'s high number as the source for his information, the Washington Post article, did:

Some states with high debt balances have a high proportion of residents with graduate degrees. Metropolitan Washington, for instance, is one of the most educated regions of the country. The District has the highest percentage of residents with advanced degrees, while Maryland has the third-highest, according to Census Bureau data.

My hunch is that Mooney knew what he was doing here.