Intelligencer accuse the president of diverting attention from real issues

If you didn't see this morning's editorial, "Diverting Attention From Real Issues," you missed a 217 word personal attack on the president. The excuse is that the president has criticized those who disagree with him about the Iranian nuclear treaty. (The nerve of that president!) Here's an example from the editorial:

Hypocrisy is, of course, a common theme for Obama. So is demagoguery and attempting to demonize anyone who disagrees with him. At one point last week, he referred to political foes as "crazies."

Wait a minute. Didn't last week's editorial tell us that Obama's "crazies" comment was referring to those who opposed alternative energy sources? (Just a hunch but I'll bet that this won't be the last time we see Obama's "crazies" quote in an Intelligencer editorial.)

And the president even had a "spokesman" refer to

a planned gathering of people who oppose the deal as a "pro-war rally."

Name calling is, of course, a tactic used to divert attention from the facts in a debate. Clearly, Obama has a reason to do that.

The editorial contains no "facts in a debate," no suggestions of what should be done with Iran, or even how Iran might be encouraged to abandon its nuclear ambitions short of war. Instead, it's all about the president: he's a hypocrite and a demagogue, and he demonizes "anyone who disagrees with him." (Good thing this isn't "name calling.")

The piece reminds me of something I've noted before with some previous Intelligencer editorials: projection. According to life script:

Psychological projection involves projecting undesirable feelings or emotions onto someone else, rather than admitting to or dealing with the unwanted feelings. Have you ever disliked someone only to become convinced that the person had a vendetta against you?

A vendetta? Now where have I seen that before?

President Obama has renamed Mount McKinley to the consternation of a number of Republicans (especially those from Ohio). It probably doesn't matter that most Alaskans including Senator Murkowski(R) as well as former Governor Palin have always referred to it by its historic name (Denali) or that President McKinley had nothing to do with the mountain and never visited Alaska. What is important is that Republicans and our local "newspapers" have something new to complain about. I'm not sure what form the attack from our local "newspapers" will take -- right now, I'm leaning toward executive arrogance/overreach or, borrowing from regular contributor Robert Murray, another Obama power grab. I'll be looking for the local outrage/editorial on Wednesday or Thursday.

I was off by a day -- this morning's editorial," 'Mount McKinley' is Law of the Land," adds another 243 words to their Obama attacks. The only substantive point in the editorial is that the president, somehow, broke the law. (In checking the editorial's assertion, I found that the Intelligencer is one of the few places online that bothers to argue this point - even some of the crazier right wing sites never mention it.) And of course the editorial never explains which law or how the president broke it. A USA Today story yesterday explains how the name change took place:

The Obama administration's action breaks a 40-year impasse over the name of the mountain. Alaska has been petitioning for a name change since 1975, but a bipartisan effort by Ohio's congressional delegation has blocked the effort by introducing bills requiring it to be named after McKinley, who was born in Niles, Ohio and buried in Canton.

And for years, just introducing the bills was enough to block a name change. That's because the United States Board on Geographic Names has a long-standing policy of not making name changes under consideration by Congress.

"While the board does have a policy of deferring action when a matter is being considered by Congress, contradictory bills on this issue have been proposed by various members of Congress since the late 1970s," Jewell said in her order. A 1947 law gives the secretary the authority to change names on her own when the board does not act in a reasonable time.

Beyond incorrectly asserting that Obama "arrogantly" broke and then "trashed" the law of the land, it's just more of the same from the Intelligencer.

Apparently this is making its way around the Internet: 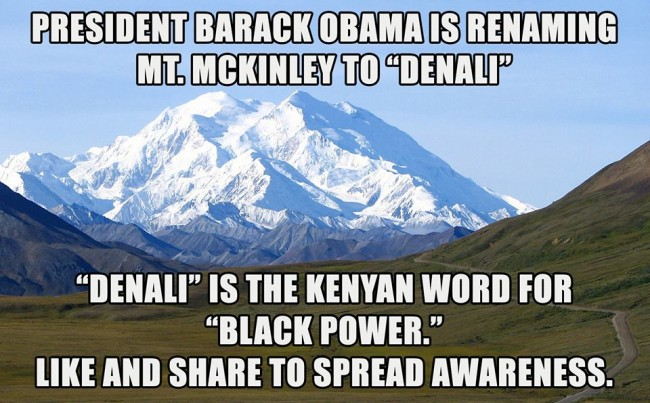 As Mediate points out:

Citizens of Kenya do not speak “Kenyan” because such a language does not exist.

But let's not allow that to a ruin a good anti-Obama meme.

(hat tip to Digby at Hullabaloo)