The senator has apparently never heard of supply and demand

No matter how Senate Democrats may try to spin it, inflation is nothing more than a hidden tax on the American people. pic.twitter.com/1QeYJepqo3

Look at the first three items (the ones with a sizable increase) of what Capito calls the “Biden Inflation Tax”: car rentals, gasoline, and airfares. According to the senator, the cost of travel has risen dramatically since last summer and somehow it’s President Biden’s fault even though she never explains which Biden polices have provoked these large percentage increases. Capito doesn’t explain because she can’t – the dramatic increases are simply too much demand chasing too little supply.

“I don’t care how much it costs, I (we) need a vacation.” If you haven’t said words to this effect, I’m sure that you’ve heard others express this thought. And if you have done any travelling this summer, you’ve personally seen the consequences. I travelled to upstate New York last month and saw a dramatic increase from a similar trip seven years ago. The planes were all full and on two of the four legs of my trip the carrier was offering vouchers of possibly $800 for volunteers to take a flight the next day. I’m sure the carrier was not doing this out of the goodness of its heart which probably meant that someone was probably paying at least $900 to travel less than 500 air miles. Additionally, my rental car was at least double of what I paid seven years ago. (A friend recently flew into Boston and found no rentals available at the airport. To get a car, he had to take a taxi to a rental agency many miles away.) Finally, high demand has also affected the cost of gasoline as it does every summer in non-pandemic years.

So, where’s the beef? Capito and the Republicans never explain how Biden's policies increased the cost of travel from last year to this year.

But what about other costs? Capito’s tweet lists consumer goods that now cost more than they did last summer: bacon, oranges, milk, and electricity. I checked and they do cost more. But is this Biden’s fault? My research found a lot answers -- some of which are quite complex. I found CNN’s fact check to be among the more succinct attempts to answer the question:

Facts First: While some economists say the stimulus packages passed in response to the Covid-19 pandemic are having an impact on inflation, it's misleading to suggest that's the only explanation for the recent rise in inflation. Blaming it exclusively on Democratic spending proposals misrepresents what's actually been passed, and ignores the trillions of dollars in spending passed last year supported by Republicans and signed by then-President Donald Trump which economists say have also contributed to inflation.

Last year, Congress passed two bills totaling around $3 trillion in Covid relief spending -- the $2 trillion Coronavirus Aid, Relief and Economic Security Act passed in March 2020, and the $900 billion pandemic relief bill passed in December 2020. Both were signed by Trump and supported by Republicans. The economic stimulus packages, including the $1.9 trillion American Rescue Plan signed by Biden in March 2021, which contained at least one tax credit program which is already in effect, have contributed to inflationary pressures but are not the only reason behind the spike, experts say.

(Note – the article cites economists to prove its conclusions.)

But what about the possibility of increased inflation? I’m not sure that anyone can definitively answer that question. Here is Reuters take on the most recent economic numbers:

U.S. consumer prices increases slowed in July even as they remained at a 13-year high on a yearly basis and there were tentative signs inflation has peaked as supply-chain disruptions caused by the pandemic work their way through the economy.

The data could provide some support to Fed officials who have repeatedly said that the current burst in inflation is temporary and likely to fade as the handful of categories that have caused inflation to surge in recent months get back on an even keel.

Finally, coming soon to a media source near you: look for Capito and the Republicans to start screaming about the deficit – something we heard nothing about while Trump was president. From Pro Publica: 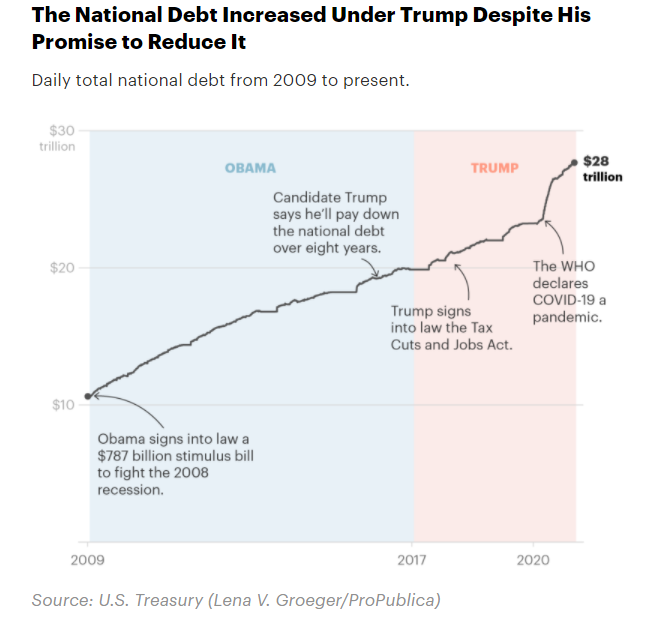