How to lie with statistics

On Tuesday, our local congressman, David McKinley, retweeted the following from the GOP and the White House:

The #PaycheckProtectionProgram is helping small businesses across the country, especially the smallest and hardest hit.

In fact, 1 million out of the first 1.6 million #PPPLoans went to businesses with 10 employees or less. pic.twitter.com/IElCLMH7oB

America's smallest businesses received the majority of loans in the first wave of the Paycheck Protection Program! 🇺🇸 pic.twitter.com/KzvGKF0cjh

I had read that the Paycheck Protection Program had favored large businesses over small ones and that many small businesses had been shut out by banks who clearly favored their own clients. But wow, what a great program! It's a government program reaching those who most need it. Or that, at least, is how Trump and McKinley want us to respond to the program. A closer look yields a much different response.

The first McKinley tweet tells us that “1 million out of the first $1.6 million went to businesses with 10 employees or less.” But wait a minute, the program gave out a total of $349 billion (with a b). If you do the math (subtracting 1.6 million from $349 billion), the obvious question becomes “what happened with the remaining $348,998,400,000?” We don’t know: despite pressure from Democrats and the media, the government has still not released who received what amount.

Look at McKinley’s second tweet. It appears to be new information, but it is the same information as the first only it's stated differently. 1 million divided by 1.6 million yields the 62.5% figure. Again, the $1.6 million is a very, very small percentage of the amount spent. (If I did the math correctly, the amount cited is less than one-half of one percent of the overall total.) As I noted above, the government has revealed nothing about how the money was spent in the 99.5% of the program that was not in the first wave.

What we do know

The Associated Press, Fortune, and CNBC, among others, have done some investigating and found that many of the program's recipients did not fit the "mom and pop"or small business label that the Trump administration attached to them. For instance, the CNBC link headlines:

It then presents the following chart (from Morgan Stanley’s findings): 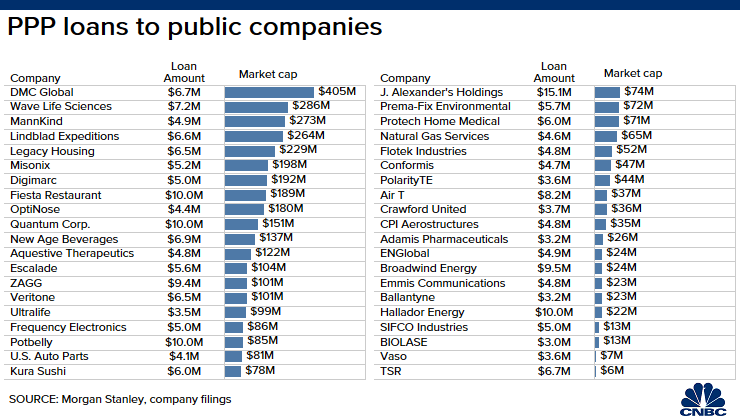