Some geeky stuff on the cost of electricity

It's time for another anti-Hillary editorial. It meets all of the criteria: 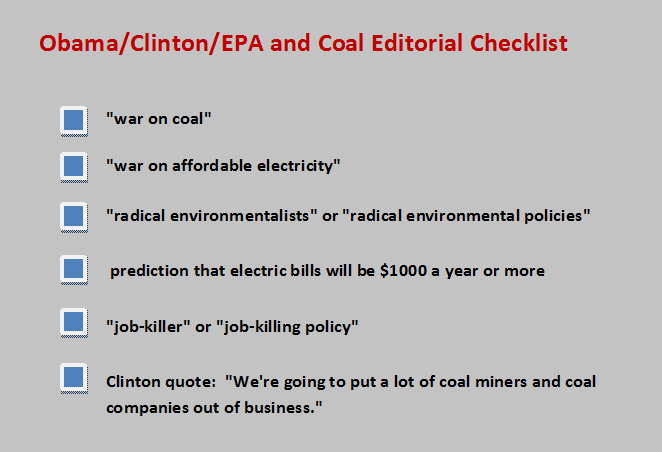 What makes it somewhat different is the emphasis on the use of statistics (one verifiable but the rest not) to support the editorial point that electricity prices have risen dramatically since the beginning of the Obama presidency and will rise much higher under a Clinton presidency. It begins:

Electricity prices have gone up as utilities close coal-fired power plants and switch to other fuels. When Obama took office in 2009, the average residential price of electricity in the United States was 10.98 cents per kilowatt hour. In April, the last month for which the Energy Information Administration had figures, the cost had gone up to 12.43 cents.

The 12.43 cents current figure is accurate -- here is the Energy Information Agency's most recent report. On the other hand, I could not find the 10.98 cents figure used in the editorial anywhere in EIA reports. The EIA does list the average for 2008 (the last year of the Bush administration) to be 11.88 cents and in January of 2009 (Obama's first month) it was 11.03.

Additionally, these figures do not account for inflation. Using an inflation calculator suggests that even the editorial's undocumented figures do not show a statistically significant increase.

So even if we use the editorial's undocumented figures, the increase is minimal.

And of course, we get the usual assertion about the rising cost:

That is just the tip of the iceberg, because Obama’s Environmental Protection Agency has just begun enforcing anti-coal regulations. Once they kick in fully, many Americans will find their power bills up by $1,000 or more a year.

Finally, Trump, the noted flip-flopper, will rescue us:

Good for Trump for standing up for coal miners. And good for him for being concerned about coal-reliant states such as ours.

Note -- I praised Mike Myer a couple weeks ago for actually citing sources hoping that with the new online format he and the editorial writers might adopt a policy of actually telling us where they got their info. This editorial starts well with one EIA number but then abandons the process. It's a new format but it still has the same lack of documentation for its sources as the old one. I guess some things don't change.