Don't bother with the story -- just look at the picture and read the headline! 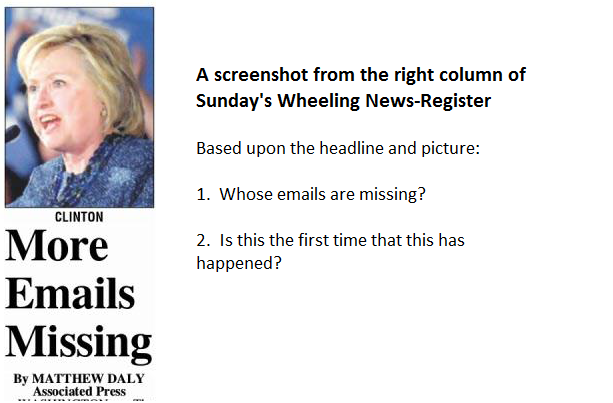 Here are the first two sentences of the AP report:

The State Department said Friday it can't find emails belonging to a former department employee who helped set up and maintain Hillary Clinton's private email server when she was secretary of state.

The department has found emails from Bryan Pagliano's work as a private contractor, spokesman Alec Gerlach said, but the files were created after Clinton left office in January 2013.

As I noted here, studies suggest that a majority of Americans never get past the headline. In this case, those readers would see the headline and the accompanying photo of Hillary Clinton and no doubt assume that it was Clinton's emails that were missing (again) instead of emails created by a contractor. The non-reader would also miss what the AP story subtly hints at -- that this search may be part of a Republican "wide-ranging" search for something to pin on Clinton.

By the way, if you google the article, here is the more precise headline that you will most likely find atop the article: