A professional wrestler, a Mike Myer column and a Trump tweet 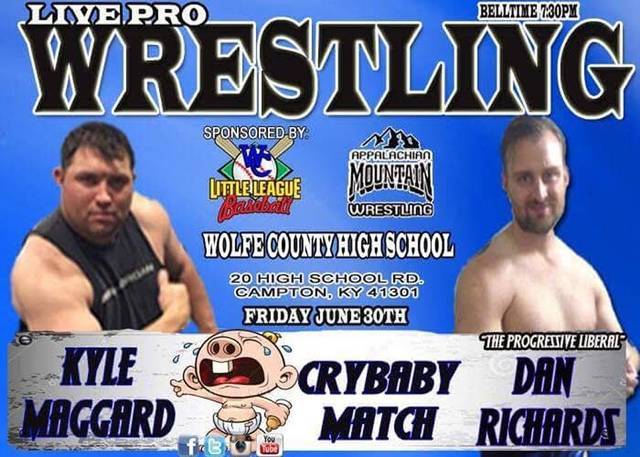 Virginian Dan Harnsberger has been the subject of several media stories this week. In case you missed them, Harnsberger is a real estate agent by day and a professional wrestler for Appalachian Mountain Wrestling by night. It’s his wrestling name and his persona that has generated the interest: Harnsberger is the Progressive Liberal. And yes, he’s a wrestling “heel” or bad guy.
As the villain, he gets to insult the audience. According to the Washington Post, he condescendingly says things like:

“I understand now why you all identify with country music. It’s slow and it’s simple and it’s boring, just like each and every one of you.”

Not surprisingly, Breitbart is willing to explain his popularity:

His moves include smugness, condescension, and whining, none of which do him much good in the ring but they all do wonders for his heel persona.

– Perhaps most important, changing the way other Americans, especially those who run companies that can bring jobs here, view West Virginia.

How do we do this? Myer first suggests we take the advice of an Ogden favorite, E. Gordon Gee:

During a visit to Wheeling last month, West Virginia University President E. Gordon Gee had this to say: “We have to make West Virginia cool and hip, and a place young people don’t want to leave. The talent drain is killing us. We have to get this turned around.”

(Does anyone else find it odd that we’re taking advice on becoming hip from a man who always wears a bow tie?)

Myer plays it both ways. Here West Virginians need to be cool and hip to attract businesses but Myer usually argues just the opposite; a lack of coolness is our defining feature – it’s what makes us superior to those liberal elitists who put us down for our lack of sophistication. (See here, for instance.)

Myer also adopts Ruby’s suggestion for attracting people to West Virginia – using social media. But do positive West Virginia/Appalachian images on social media have any chance when stacked against the overwhelming number of stereotypical images found there?

In case you’ve missed a description of it, here is the New York Times’ account of Trump’s Sunday morning tweet:

On Sunday, Mr. Trump continued his attacks on the media. He posted on Twitter an old video clip of him at a World Wrestling Entertainment event in which he appears to be pummeling his opponent, who has the CNN logo superimposed on his head. Leaving his opponent on the ground in the video, Mr. Trump walks away.

Are all these related?

I think Trump’s use of professional wrestling to make its point is not accidental. Professional wrestling exists in a clearly-delineated, good vs. evil world and one of the reassurances for its fans is the knowledge that the good guy, despite all the bad guy’s dirty tricks, will win in the end. I personally find the Trump video appalling in its advocacy of violence toward the media; hopefully none of his followers will take up Trump’s not-so-subtle suggestion of what should be done with “fake news."

To that end, the “Progressive Liberal” wrestler embodies all those exaggerated descriptors of liberals that Fox News, the right-wing media, and Ogden newspapers have been pushing non-stop for most of the 21st century. That most are either untrue or a gross simplification of progressive beliefs is no doubt irrelevant to Trump’s base -- they now have, as the video demonstrates, a leader who will take action against all those “bad hombres” in fake news.

What about social media? Can it change the world’s attitude toward West Virginia and Appalachia? Perhaps. According to Myer, Chelsa Ruba’s campaign attracted millions. I hope it has changed minds. Can it overcome the millions of negative postings of jokes, cartoons, stories and whatever about Appalachia? Add to this the national media’s characterization of West Virginia as “Trump Country" where its citizens vote against their own best interests and where the state’s largest newspaper chain warmly embraces Trump while totally ignoring his faults. (Yes, but Ogden readers do get weekly editorials that Democrats ought to tone down their rhetoric.)

The state needs to shed its stereotype. Unfortunately, I don't know how we do that.