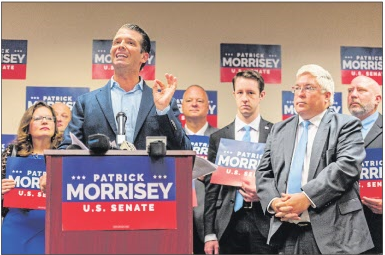 From this morning's Charleston Gazette-Mail:

Donald Trump Jr. joined the West Virginia attorney general on the campaign trail Tuesday in an effort to hitch the latter’s U.S. Senate bid to economic success reported under the current presidential administration.

My favorite quote is when the president's son was asked to comment on the possibility of Don Blankenship entering the race:

“I’m not a legal expert, but my analysis doesn’t seem like he has much of a chance there,” he said. “This is a two-party race.”

Junior is not a legal expert? I thought that was already apparent.

Manchin on his relationship to Trump: "We just kind of do the man-bump type thing."

This morning's Politico has an article about Joe Manchin's embracing of the president and his policies:

How close of an embrace? How about supporting him in 2020 for President:

But more than any other Democrat in Congress, he's positioned himself as a vocal Trump ally. In fact, the senator, up for reelection in a state Trump won by more than 40 points, told POLITICO he isn’t ruling out endorsing Trump for reelection in 2020 — a position practically unheard of for a politician with a “D” next to his name.

The president recently mocked Manchin in front of the Senate GOP caucus as trying to hug him all the time — only a slight exaggeration, by Manchin’s telling.

“We just kind of do the man-bump type thing. That’s it. And I think he’s pulling me as much as I’m pulling him,” Manchin said in describing his physical embraces with the president.

I can hardly wait for Don Blankenship, who claims he is "Trumpier than Trump," to get into the race.