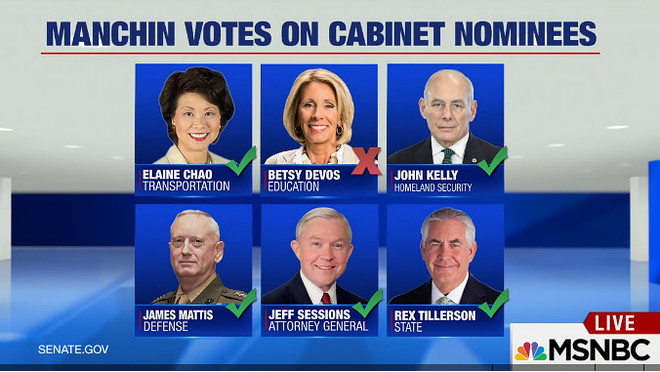 Explaining his vote (the only Democratic one) for Jeff Sessions

According to Market Watch:

"It’s more what we know about a person than what people say about a person. . . . I have not seen the things he’s been accused of or people talked about."

Specifically on the matter of Session’s lightning-rod civil-rights record vis-à-vis African-Americans: “If I had any [firsthand] indication that he was bigoted or he was racist, I wouldn’t have voted for him. I didn’t see that.”

It wasn't that well hidden -- I wonder if the senator even bothered to look.

So Trump doesn't even consider Manchin "sort of a Democrat"?

"Morning Energy" at Politico noted a Trump comment about the signing ceremony ending the Stream Protection Rule. (See picture, next post down.)

As has become his custom, Trump invited members to gather around for a picture as he displayed the signed resolution. He motioned for Heitkamp to come closer “even though she’s sort of a Democrat.”

He apparently said nothing to Manchin. I guess in Trump's eyes, Manchin doesn't even reach the "sort of" level.

Some conservative words of praise for the senator

If some Democrats consider Trump heartless, Manchin has aimed to become a sort of party liaison to him, building a relationship in the process.

Meanwhile, the former West Virginia governor insists that he has not received pressure or pushback from Senate Democratic leadership to oppose Trump.