“What About The Next Time?”

Yesterday’s lead editorial in the Wheeling News-Register defended President Trump by rewriting America’s short history of dealing with the coronavirus. (Like good propaganda, it rewrites the past in order to explain the present.) The editorial begins:

By the time we knew the enemy at our gates was a viciously specialized foe, it was too late.

That is simply not true. The first reports came out of China on December 31 and on January 30, the World Health Organization issued a global health emergency. While other countries scrambled in February to contain the virus and U.S. health researchers raised all sorts of alarms, Trump told us it would soon disappear and did nothing. The editorial, instead of faulting the Trump administration’s lack of response to the virus, follows Trump’s lead and blames China* and the World Health Organization:

Clearly, better information from the place where COVID-19 seems to have started – China – might have been helpful in walling off our nursing homes (along with jails and prisons). Blame both Chinese officials and the World Health Organization for the information gap.

Yes, it's the fault of the Chinese and WHO but as Stat News and others have demonstrated, Trump’s delay in acting was the critical difference:

Due to exponential viral spread, our delay in action was devastating. In the wake of the U.S. response, 117,858 Americans died in the four months following the first 15 confirmed cases. After an equivalent period, Germany suffered only 8,863 casualties. Scaling up the German population of 83.7 million to America’s 331 million, a U.S.-sized Germany would have suffered 35,049 Covid-19 deaths. So if the U.S. had acted as effectively as Germany, 70% of U.S. coronavirus deaths might have been prevented.

(Note -- the article has comparisons with other countries.)

Here is a graph from the John Hopkins Coronavirus Resource Center that uses a similar premise. It illustrates deaths in various countries from the date on which the country’s 50th coronavirus case was confirmed. If the editorial is correct, countries would have similar trajectories. As the graph demonstrates, that is not so – the United States’ line represents many more deaths even when compared to India, a country with a much larger population. 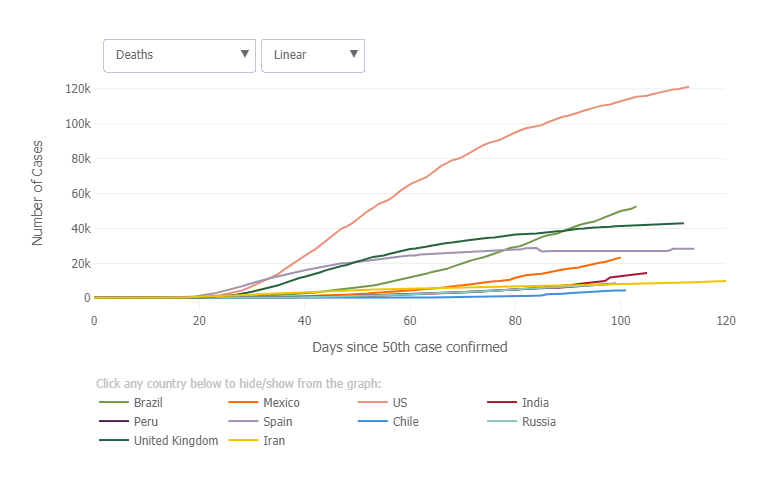 As to the near-term, the numbers do not appear to be leveling-off or decreasing:

The editorial does not mention the president or any action by his administration. This is not surprising: our local Ogden papers have not critically done so in the past and probably won’t in the future. This editorial is only secondarily about dealing with the coronavirus; its primary purpose to deflect blame from Donald Trump even if he's not mentioned.

*At least the News-Register did not refer the virus as the “kung-flu” as Trump did yesterday.

More from the Trump administration: