The beginning of the column attacks “Active Shooter,” a video game that will likely not be released. (It fits his thesis, however.) Myer then moves on to attack older video games like “Thrill Kill” and “Grand Theft Auto.” In the process, he does offer a widely-circulated 2015 statement from the American Psychological Association that there is a connection between violent video games and aggressive behavior. If you do any research on the APA statement, however, you quickly realize how controversial the APA statement is within the field. For example, here’s researcher Christopher J. Ferguson writing in The Conversation:

It’s bad enough that these statements misrepresent the actual scholarly research and misinform the public. But it’s worse when those falsehoods give advocacy groups like the NRA cover to shift blame for violence onto nonissues like video games. The resulting misunderstandings delay efforts to address mental illness and other issues that are actually related to gun violence.

But shifting blame onto video games is what Myer and the NRA are about. Myer writes:

Only an idiot would argue no one can be spurred to violence by a video game. Pair two already troubled online players against each other, throw in a little taunting, then wait for the gunfire.

Does Myer present any evidence on this? No. And in asserting a link between video games and gun violence, he ignores the obvious two countries, South Korea and Japan, whose citizens play even more video games than we do and yet have only a fraction of our gun violence. Here’s a chart from an excellent analysis in the Washington Post on gun violence and video game: 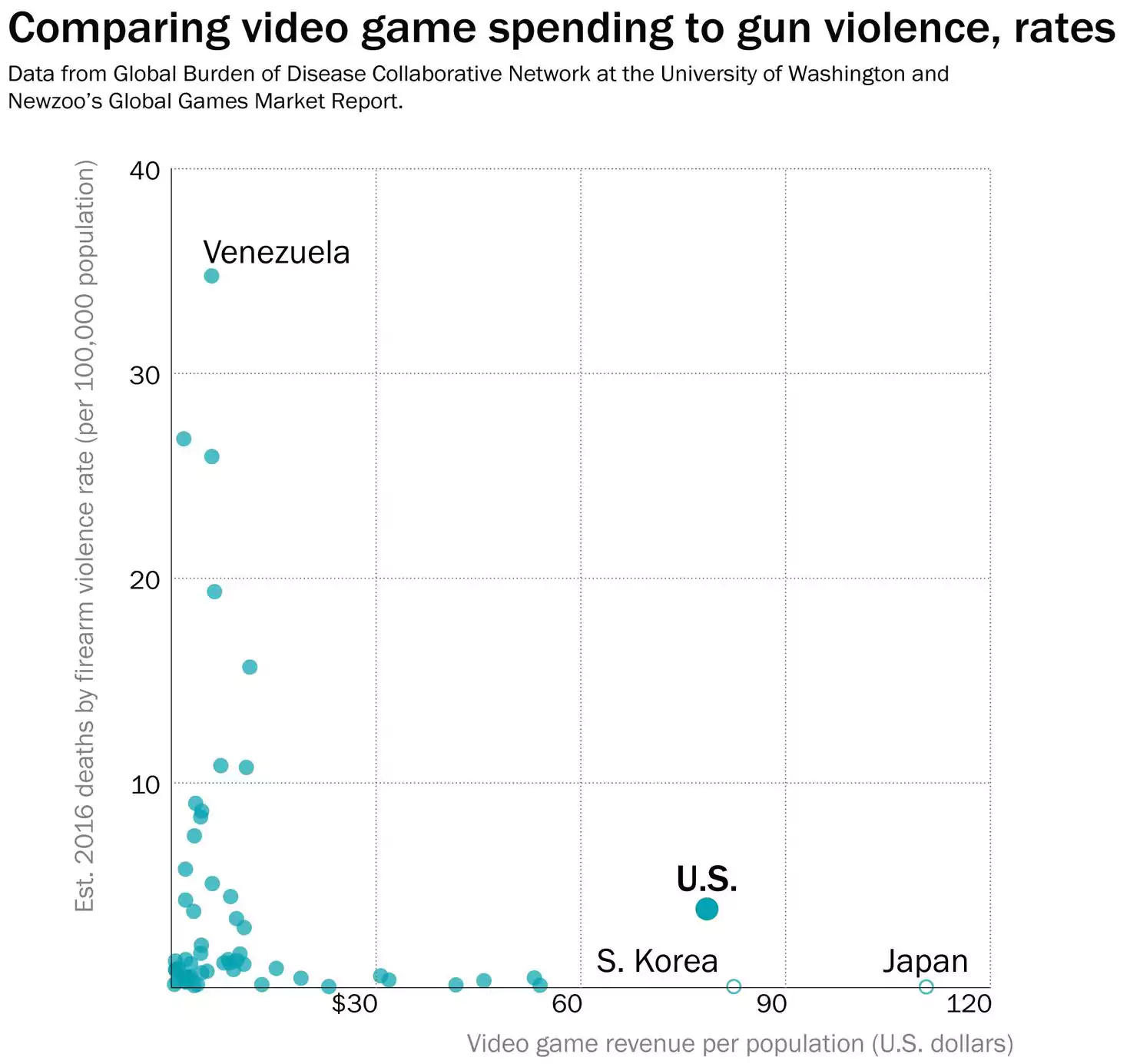 In 2013, American gun-related deaths included 21,175 suicides, 11,208 homicides and 505 deaths caused by an accidental discharge. That same year in Japan, a country with one-third America’s population, guns were involved in only 13 deaths.

This means an American is about 300 times more likely to die by gun homicide or accident than a Japanese person.

It should be clear that Myer and the NRA are really about finding other reasons to blame for our gun violence rather than the easy access to guns in America. As CNN Money quotes an advocate for gun safety:

"Americans play the same video games, watch the same TV shows and experience mental illness at the same rates as our peers in other high income nations," founder Shannon Watts [of Moms Demand Action] said in a statement to CNN. "What separates America is our weak gun laws and unacceptable rates of gun violence. Americans want action on gun safety, not video games."