Under the radar: a Trump favorite and America's largest TV empire gets even bigger

Already the largest owner of local television stations in the United States, Sinclair said Monday that it had agreed to buy Tribune Media for $3.9 billion, beating out other suitors including Nexstar and 21st Century Fox. With the deal, Sinclair would reach more than 70 percent of American households, with stations in many major markets, including Chicago, Los Angeles and New York, giving it significant heft at a time of increasing consolidation in the industry.

Here's a map from the Times that shows Sinclair's eventual reach: 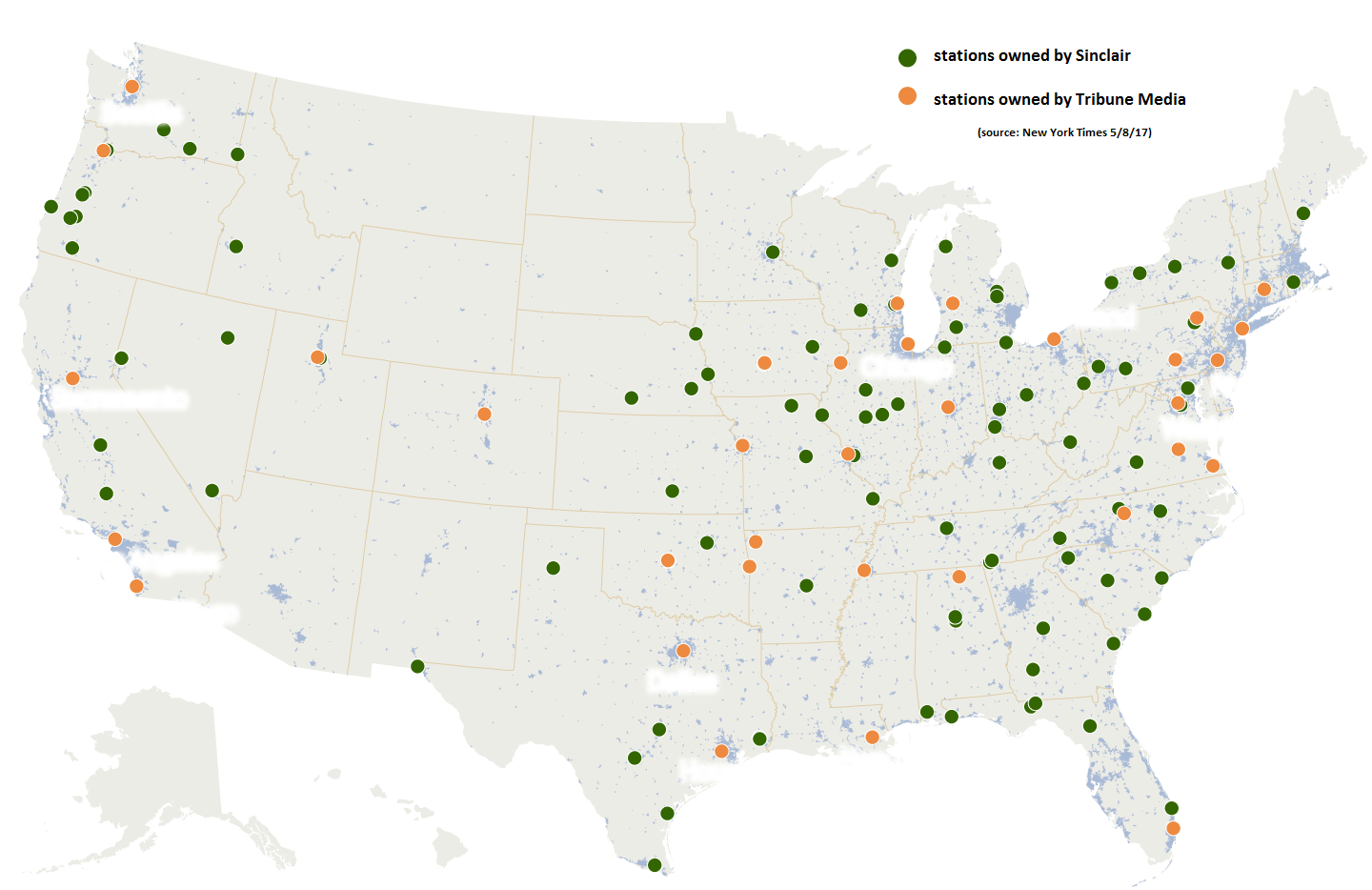 Fewer voices in the marketplace

As the Times reports:

“It’s an incredible amount of power in one company’s hands,” said Craig Aaron, president of Free Press, a consumer advocacy group that has opposed the deal. He added that Sinclair, based in the Baltimore area, had a tendency to “centralize things as much as they can,” saying it produced stories from its headquarters with a clear conservative slant.

Michael J. Copps, a Democratic commissioner on the Federal Communications Commission from 2001 to 2011 who is now a special adviser to the nonpartisan consumer group Common Cause, called the planned merger “another blow to the diversity of journalism that we should have.”

“It’s symptomatic of what is happening in this market,” he said, “which is fewer and fewer organizations controlling more and more of the information on which our democracy rests.”

FAIR (Fairness and Accuracy in Reporting) did an excellent report on Sinclair earlier this week including its connection to the Trump administration:

The purchase, which gives Sinclair a staggering reach of nearly 69 percent of the US population, would’ve been in violation of ownership restrictions just weeks ago. But last month, the Trump-appointed FCC chair, Ajit Pai, reinstated the “UHF discount,” an outdated loophole that allowed media conglomerates to exceed the nation’s 39 percent cap on ownership. Sinclair made a $420 million deal to buy Bonten Media Group the very next day.

(Note -- FAIR makes extensively use of linking in its analysis that does not copy well when citing its sources. Those interested in sources should use the original FAIR link.)

And what did Trump get?

Months ago, Trump’s son-in-law Jared Kushner told business executives, according to Politico, that “Trump’s campaign struck a deal with Sinclair Broadcast Group during the campaign to try and secure better coverage.” The deal, Politico reported, was that Sinclair would give Trump more (uncritical) coverage, in exchange for more “access to Trump and the campaign.”

As a watcher of local news (like 9 in 10 adults as well as 43% who watch it often), I've noticed that WTOV has made a number of subtle and not-so-subtle changes over the last year or so. They've recently added a "Terrorism Alert Desk" to make us even more fearful of undocumented aliens and Muslims. (Yes, I'm sure that a terrorist's first choice would be Steubenville, Ohio.) They've also added news reports from the Circa News Service which Sinclair bought last year. Circa attempts to target the 18 - 35 age market and while I am long past that age, I don't see anything special or appealing in its reports. And starting last year, it did seem that the station had become more pro-Trump and pro-Republican in its coverage. Finally, the number of editorials from Mark Hyman, who I find as personally repugnant as Rush Limbaugh or Bill O'Reilly, seems to have increased. (By the way, if Sinclair creates a national network by joining all of its local stations, some sources see Bill O'Reilly as their first signing. Others see Sean Hannity.)

Is this a done deal?

The Sinclair-Tribune deal awaits approval by the Federal Communications Commission, which under Trump has signaled a more relaxed attitude toward media ownership rules. Though Sinclair-Tribune may need to divest some stations in certain markets to remain under ownership caps, the deal is largely expected to be approved.