Paul Krugman looks at the larger question: why are we so fixated on coal jobs?

Earlier this week economist and New York Times columnist Paul Krugman columnist had an excellent post about the Trump presidency and the future of coal. His starting point was the president's major address in which he once again promised to bring back coal jobs. As Krugman notes, that's not going to happen:

He is not, of course, going to bring back coal mining as an occupation. Coal employment’s plunge began decades ago, driven mainly by the switch to strip mining and mountaintop removal. A partial revival after the oil crises of the 70s was followed by a renewed downturn (under Reagan!), with fracking and cheap gas mainly delivering the final blow. Giving coal companies new freedom to pollute streams and utilities freedom to destroy the planet won’t make any noticeable dent in the trend.

Krugman asks "why are people so fixated on coal jobs anyway?" and then notes:

Even in the heart of coal country, the industry hasn’t really been a major source of employment for a very long time.

He then asks us to compare the number of mining jobs in "the heart of coal country" (West Virginia) with the number of health care workers. Here's the graph: 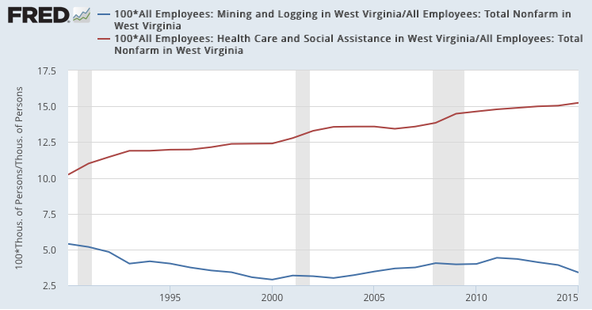 His summary of the graph leads him to another question:

Even in West Virginia, the typical worker is basically a nurse, not a miner — and that has been true for decades.

So why did that state overwhelmingly support a candidate who won’t bring back any significant number of mining jobs, but quite possibly will destroy healthcare for many — which means jobs lost as well as lives destroyed?

Krugman's answer goes beyond the actual mining of the mineral:

The answer, I’d guess, is that coal isn’t really about coal — it’s a symbol of a social order that is no more; both good things (community) and bad (overt racism). Trump is selling the fantasy that this old order can be restored, with seemingly substantive promises about specific jobs mostly just packaging.

One thought that follows is that Trump may not be as badly hurt by the failure of his promises as one might expect: he can’t deliver coal jobs, but he can deliver punishment to various kinds of others. I guess we’ll see.