Today's Wheeling News-Register editorial lectures us on the imperial president 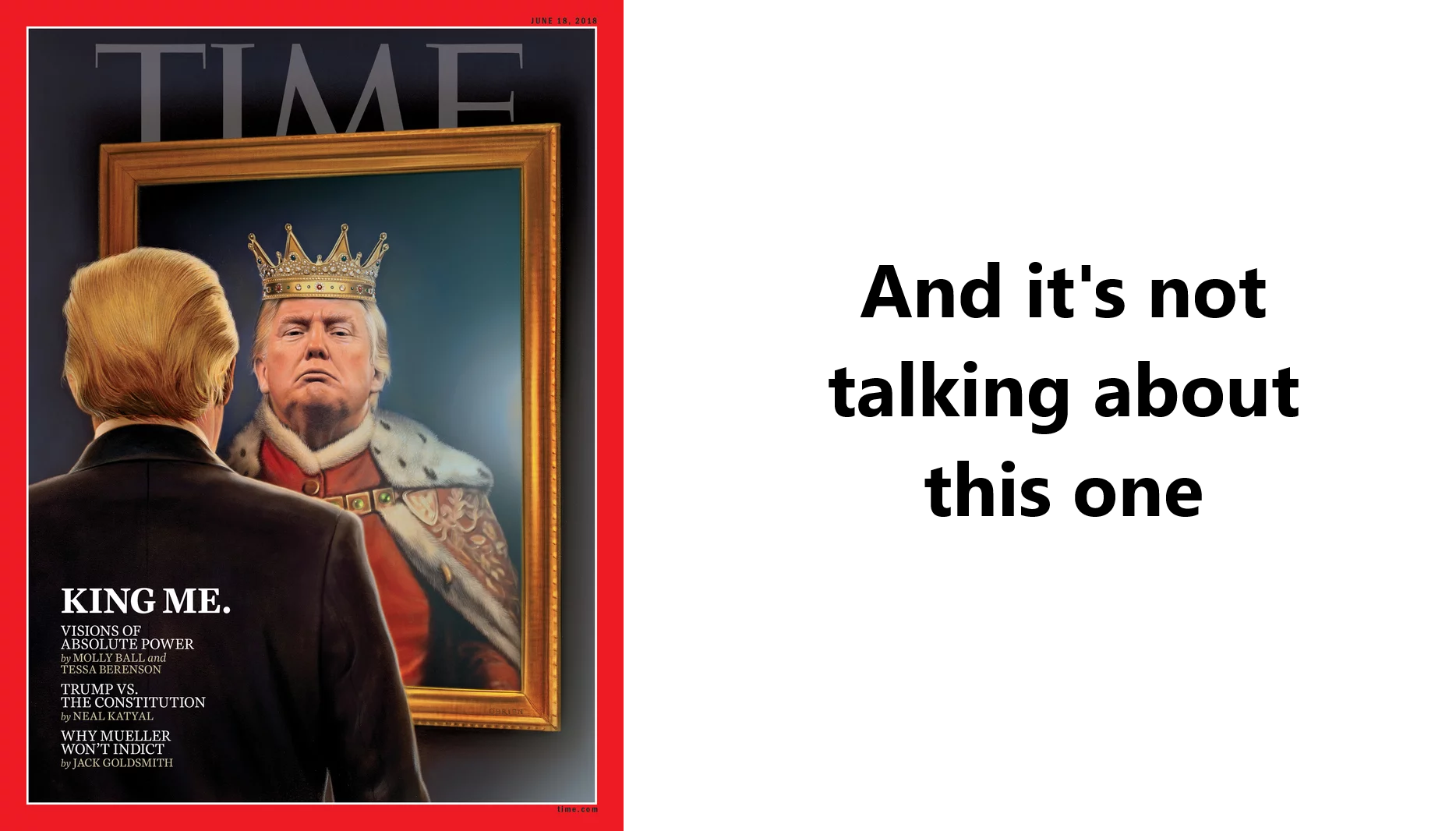 In just the last week, President Trump asserted the absolute right to pardon himself:

As has been stated by numerous legal scholars, I have the absolute right to PARDON myself, but why would I do that when I have done nothing wrong? In the meantime, the never ending Witch Hunt, led by 13 very Angry and Conflicted Democrats (& others) continues into the mid-terms!

And both Trump and his lawyer have argued that he could shoot someone (like James Comey) and not be indicted:

Candidate Donald Trump bragged that he could shoot someone on New York’s Fifth Avenue and not lose any support, and now President Donald Trump’s lawyer says Trump could shoot the FBI director in the Oval Office and still not be prosecuted for it.

“In no case can he be subpoenaed or indicted,” Rudy Giuliani told HuffPost Sunday, claiming a president’s constitutional powers are that broad. “I don’t know how you can indict while he’s in office. No matter what it is.”

Both Wheeling "newspapers" have been totally silent about Trump's assertion of king or dictator-like power -- today's editorial about the imperial presidency references (surprise! surprise!) former president Obama. And taking their support for Trump one step farther, the editorial indicts Congress for not being even more supportive of the president:

It is unfortunate in a way that even Republicans in Congress sometimes refuse to go along with President Donald Trump's initiatives. But after eight years of former chief executive Barack Obama's imperial presidency, one can hardly blame lawmakers for being on their guard.

The editorial is about a report from a Republican subcommittee about possible Iranian access to American banks during the Obama administration (It is a complicated story. Here is the Washington Post's explanation.) Of course, the paper did what it usually does in this situation: it didn't even try to inform its audience -- it skipped publishing any news report of the event preferring to give us their interpretation in an editorial:

He [Obama] had U.S. licenses approved for the transaction, in violation of the law.

The editorial doesn't say who stated it was in violation of the law; my hunch is that they are referring to our fact-challenged President. As the Post reports:

In a Thursday tweet on the report, Trump erroneously called the issuance of the license “totally illegal,” a charge the subcommittee investigators did not make.

A quick question for my readers not served by an Ogden "newspaper": Are you aware of any newspaper out there that is more pro-Trump than these Ogden papers? Drop me a note if you have a paper that you would like to nominate.

Sorry, no online link to the editorial. (I'm noticing that these non-linked News-Register editorials are more likely to be published elsewhere in the Ogden "newspaper" empire.)

Today, the Washington Post's fact checker looked into "Trump’s claim that an Obama administration effort on Iran was ‘totally illegal.’" Here is their conclusion:

Trump claims the Obama administration tried to grant Iran “secret access” to the U.S. financial system. With their carefully parsed statements, U.S. policymakers certainly were not forthright to lawmakers at the time about the effort to let an Omani bank, in a one-time transaction, convert Iranian bank holdings into euros. But the granting of the license was not illegal; that statement is simply false. Indeed, the president may find OFAC licenses useful if he pursues a deal with North Korea.

The fact checker awarded four (out of four) Pinocchios to the president.