Mike Oliverio lectures us about why Biden’s FCC nominee, Gigi Sohn, should be rejected

This weekend, the Wheeling News-Register published an op-ed by Republican candidate for state senate Mike Oliverio who argues that President Biden's nominee to the Federal Communications Commission, Gigi Sohn, should be rejected.

Lying about what Gigi Sohn said

That’s attributing strong language to a bureaucrat and so I put the “sucking” quote into three different search engines to see when, where, and what the context was for Sohn’s comment. The results on all three search engines were exactly the same. Here’s Google’s results: 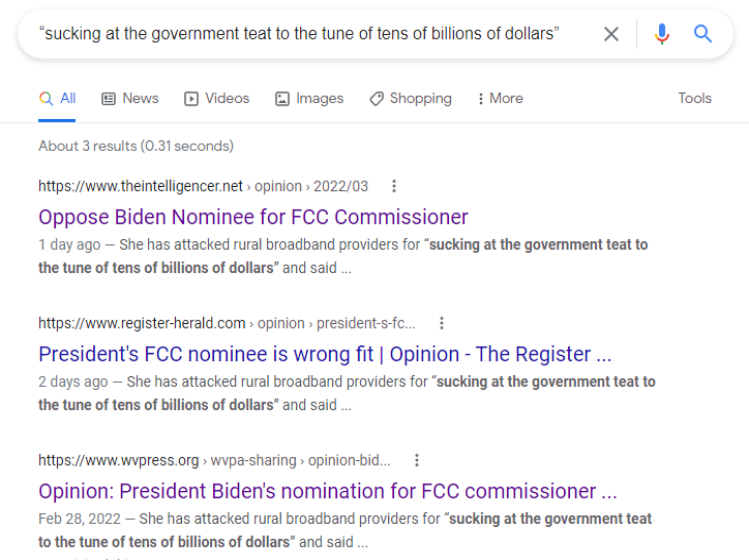 So when and where did Sohn first say this? Obviously, Sohn’s quote doesn’t exist except in the minds of Republicans trying to make her look bad.*

Oliverio then misrepresents and further lies about what Sohn said

In 2020, she went as far as to say that federal agencies were “focused disproportionately on broadband deployment in rural areas” and should focus instead on broadband needs in urban centers. . . .
Why would anyone prioritize funding for cities where residents already have a robust broadband infrastructure and multiple provider options?

The quote in the first half of Oliverio’s first sentence is accurate, but the second half lies about what Sohn concluded. Oliverio then doubles-down on it by lying about how Sohn would handle this: she did not say that she would prioritize funding for urban broadband.

I found Sohn's analysis here. Sohn states that broadband is a problem in both rural and urban areas. Note that she did not state that federal agencies should focus on urban rather than rural broadband.

Minorities and Low-income Americans, Both Rural and Urban, Are Disproportionately on the Wrong Side of the Digital Divide

The digital divide affects every geographic region of our country. While policymakers have focused disproportionately on broadband deployment in rural areas of the United States, Americans who live in cities also face enormous challenges to broadband connectivity. Indeed, noted broadband adoption researcher John Horrigan found that the country’s broadband adoption problem is three times higher in urban areas than rural.

Oliverio also attacks Sohn for having said that Fox News is state-sponsored propaganda. Apart from the fact that she might have been accurate when she said it, a number of sources suggest looking at her record. As reporter Karl Bode writes points out:

The great irony in the GOP/News Corp/AT&T alliance’s effort to smear Sohn as somebody looking to “censor Conservatives?” Right wing news outlets like Newsmax and AT&T-funded OAN actually support her nomination because she’s historically worked to encourage diversity in media viewpoints and healthy competition in media markets.

Perhaps, Fox doesn't want competition. And diversity and healthy competition? Why would Republicans be in favor of that?

*In trying to find Sohn's supposed "sucking" quote, I did find a congressional hearing earlier this year in which Sohn was asked about it. Sohn said that, to her recollection, she never said it. Again, since no Republican has ever cited a source, my hunch is that the quote was fabricated. And since he cites no source for the quote, I doubt that Oliverio took the time to look; he just went with the Republican talking points.