The Wheeling Intelligencer goes “all-in” for Trump (with update)

TRUMP: "When somebody is the president of the United States, the authority is total. And that's the way it's gotta be. It's total." pic.twitter.com/zIuiBn1Mhw

Readers of the Intelligencer can imagine the outrage had Obama argued that his authority was total.

Here is the reaction of Jonathan Turley, the constitutional law professor who defended Trump at his impeachment:

President Trump just stated that the power of the federal government is "absolute." That would effectively negate federalism and a variety of other constitutional principles. "Absolutes" find little sanctuary within our constitutional system of limited and shared powers.

Pres Trump stated that “When somebody is President of the United States, his authority is total.” The Constitution was written precisely the deny that particular claim. It also reserved to the states (& individuals) rights not expressly given to the federal government.

(Note – CNN has put together an excellent fact check of the briefing here.)

Here are just three of the many Associated Press stories that the Intelligencer could have used in this morning’s newspaper:

Note -- This morning’s paper had no coverage of yesterday’s two-hour+ news conference from the AP or any other news source.

On the editorial page: coronavirus blame for the World Health Organization and health experts

According to Lowry, WHO ought to have been blaming China.

Some Health Experts Got It Wrong

Elder blames Dr. Fauci for a comment he made in January. He also blames China. Elder thinks the criticism of Trump is part of “Trump Derangement Syndrome.” To that end, Elder argues that even Joe Biden says the criticism of Trump is a “little too harsh.” If you check the context of Biden’s statement, however, his “little too harsh” was not of Trump criticism in general but rather of Chuck Todd’s characterization; Biden was still critical of the president (something Elder ignores):

TODAY on #MTP: Former VP @JoeBiden says Trump should "listen to the health experts ... the economists."

Biden: "He should be focusing on making sure we are in a situation where we are able to see to it that unemployment benefits can get to people." pic.twitter.com/5q2cWzUKFD 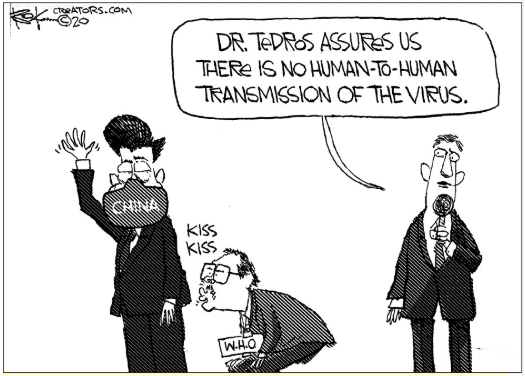 Apparently, the word is out to Trump defenders and propagandists – it’s time to blame China. Dutifully, the Intelligencer responds.

In the 39 months of Trump’s presidency, the Wheeling Intelligencer has never criticized the President for anything he has said or done. Today, they chose to remain silent after yesterday's campaign rally posing as a coronavirus briefing. I think it's clear -- the Intelligencer will never criticize Trump regardless of what he says or does.

Having found his scapegoat, President Trump continued his attack on WHO earlier today. As Stat is reporting:

President Donald Trump formally announced Tuesday that the United States will freeze funding to the World Health Organization, pending a formal investigation into the global health agency and its coronavirus response.

In prepared remarks, Trump accused the organization of “severely mismanaging and covering up the spread of the coronavirus,” suggesting that the group overly relied on unverified reports from China, which Trump argued caused a “twenty-fold increase in cases worldwide.” He did not cite a source for that figure.

“America and the world have chosen to rely on the WHO for accurate, timely, and independent information to make important public health recommendations and decisions. If we cannot trust that this is what we will receive from the WHO, our country will be forced to find other ways to work with other nations to achieve public health goals,” Trump said.