Because it’s the Democrats who are the real racists!

If you’ve had access to any news sources beyond our local Ogden “newspapers” this weekend, you’re probably aware of the president’s Twitter attacks on Congressman Elijah Cummins of Baltimore. This was the first one on Saturday morning:

Rep, Elijah Cummings has been a brutal bully, shouting and screaming at the great men & women of Border Patrol about conditions at the Southern Border, when actually his Baltimore district is FAR WORSE and more dangerous. His district is considered the Worst in the USA......

Since then, Trump has continued his attacks including one this morning.

Two weeks ago, contemporary journalism observer Poynter noted that the normally-cautious mainstream media were increasingly using the word “racist” to describe the president’s rhetoric. Since then, the process appears to be accelerating as NPR and The Wall Street Journal have recently labeled the president’s rhetoric as “racist.” While the profession debates the subtleties of the differences between “racist,” “racially-charged,” and “racially-tinged,” Ogden papers have, for the most part, ignored the issue. For example, there has been no Wheeling Intelligencer coverage of Trump’s attack on Cummings. Nor have there been any editorials criticizing the president's racist rhetoric. To the contrary, this morning’s editorial page carries a syndicated column by Town Hall’s Ken Blackwell that argues that it is the Democrats who are racists:

President Trump was elected because he offered an agenda designed to empower all Americans, not divide the country. The American electorate must firmly reject the Democrats’ attempts to divide and conquer along racial lines, and the best place to do that is at the ballot box. President Trump’s reelection might be the only way to convince the Democrats to finally give up on their divisive, race-baiting political strategy.

Yes, it’s the Democrats who are race-baiting!

Damn, those must be some mighty-strong odors!

Instead of dealing with racism, Wheeling Intelligencer editorials are apparently reserved for matters of importance to Wheeling area residents like the Apex Landfill (see today’s “Reducing Apex Odor Complaints”) which is 33.5 miles and an hour’s drive from Wheeling. 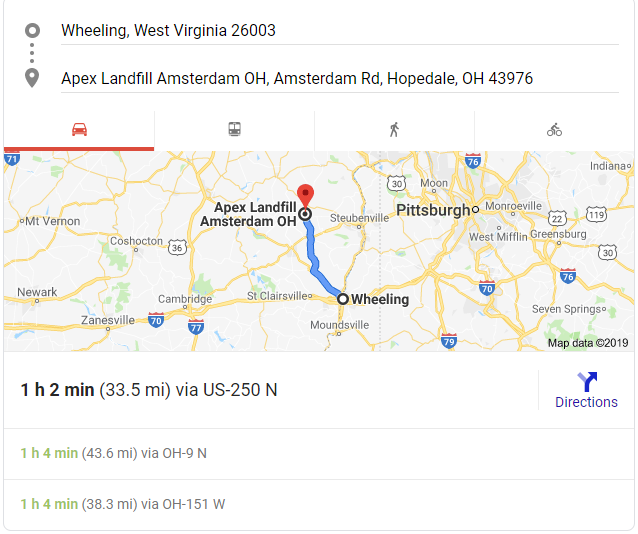 Note -- today's afternoon News-Register does carry the first half of an AP story about Trump and Cummings on page 8.