Half of the AP story but with a different headline

At the bottom of this morning’s front page is an Associated Press article on special counsel Robert Mueller’s findings. The Intelligencer included slightly over half of the 1500+ word article. The AP’s title for the article and the one used by almost all media sources was

Here’s a screenshot of the top half of the first page of results: 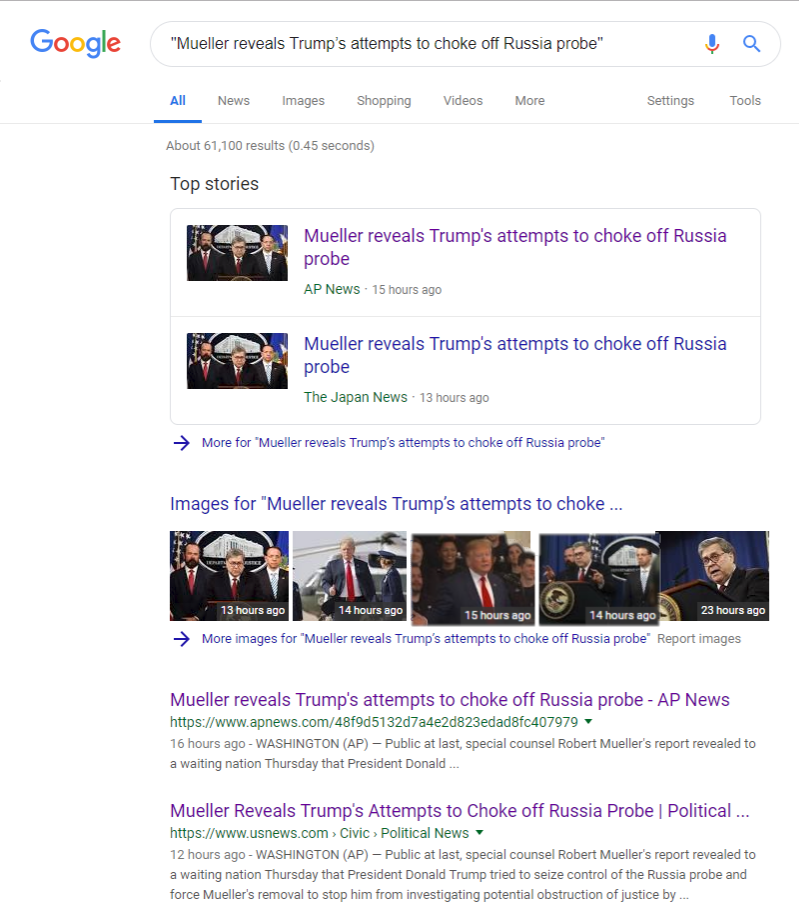 The title used by our local “newspaper” was

The Intelligencer headline clearly misses the AP article's focus on Trump's attempts to curtail the Russian investigation. (As far as the Intelligencer is concerned, that’s okay -- most people only read the headline.)

Those living outside the Wheeling area might wonder what was the most important story in this morning’s Intelligencer?

To its credit, the article does include a large picture of the dogs apparently enjoying the park.

Next to the AP story is another Mueller story by Steven Allen Adams:

Better than half of this article describes WV Secretary of State (and Ogden favorite) Mac Warner’s efforts to ensure fair elections in the state. Before that, however, Adams quotes extensively from Attorney General William Barr’s near-universally panned whitewashing of Trump’s role in the Russian interference that took place before the release of the report. For example, Adams writes:

During a press conference Thursday morning, U.S. Attorney General Bill Barr said no U.S. citizen assisted Russia in its election misinformation campaign. According to volume I of the Mueller Report released Thursday, the “investigation did not establish that members of the Trump campaign conspired or coordinated with the Russian government in its election interference activities.”

The fact checkers had a field day with Barr’s speech. Here’s what the Washington Post fact checker wrote about this particular Barr quote:

Left out was a key statement from Mueller that came right before what Barr quoted in his letter: “Although the investigation established that the Russian government perceived it would benefit from a Trump presidency and worked to secure that outcome, and that the Campaign expected it would benefit electorally from information stolen and released through Russian efforts, the investigation did not establish that members of the Trump Campaign conspired or coordinated with the Russian government in its election interference activities.”

Expecting to benefit may not be the same as actively cooperating, but the omission in Barr’s letter is significant nonetheless. The full sentence from Mueller casts a different, less flattering light on the Trump campaign than Barr’s letter indicated.

In short, Russia wanted Trump to win, and Trump campaign members were aware that they would reap an advantage from the “information stolen and released through Russian efforts.”

(Note – emphasis is in the original.)

In addition to the Post, here’s the lede from the Associated Press’s fact check of Barr’s speech:

President Donald Trump and his attorney general are distorting the facts when it comes to special counsel Robert Mueller’s report in the Russia investigation.

Of course, our Ogden reporter, instead of using the primary source (the Mueller report), depends upon the man chosen for the job because of his willingness to do Trump’s bidding in this matter. Even Chris Wallace at Fox News saw through Barr’s biases as the headline at Newsweek pointed out:

Yeah, even Fox News recognizes a shill when it sees one.