The coronavirus: masks and politics, Trump and Tulsa, and don’t forget Wheeling “newspapers”

There are many studies out there that support this conclusion. Here are the two most recent ones. From today’s The Hill:

Additionally, from a British study earlier this week:

There are numerous studies that suggest if 80% of people wear a mask in public, then COVID-19 transmission could be halted. Until a vaccine or a cure for COVID-19 is discovered, cloth face masks might be the most important tool we currently have to fight the pandemic.

Finally, here’s is some anecdotal evidence from CNN:

No cases of coronavirus have been linked to two Missouri hairstylists who saw 140 clients last month while symptomatic, county health officials said. . . .

Of the 140 clients and seven co-workers potentially exposed, 46 took tests that came back negative. All the others were quarantined for the duration of the coronavirus incubation period. The 14-day incubation period has now passed with no coronavirus cases linked to the salon beyond the two stylists, county health officials said.

Why not? As CNN explained, it’s probably because Great Clips requires stylists and customers to wear masks.

The politics of mask-wearing

I could find no hard statistics for the nation, but my personal observations suggest that mask usage is in decline in our area. I think that there are two reasons for this: the first is that the virus appears to be abating (at least in WV) and the second is that mask-wearing has become politicized. Ironically, the first suggests that mask-wearing is a victim of its own success. Masks, social distancing, and restricting travel, it seems to me, have all contributed to the virus’ declining infection rate. But as states lessen restrictions and open-up more, I think it is likely that the virus numbers will start to climb again. Along with this, the increasing politicization of mask-wearing may ensure that it will be difficult to reach an 80% rate-of-usage to halt the virus. Despite the known benefits and the influence the president might have in persuading his followers, Trump has not worn a mask in public appearances. His staff and followers have followed suit. Here is a photo of a tweet (since deleted) from the Vice President on Wednesday – notice both the absence of masks and the lack of social distancing. 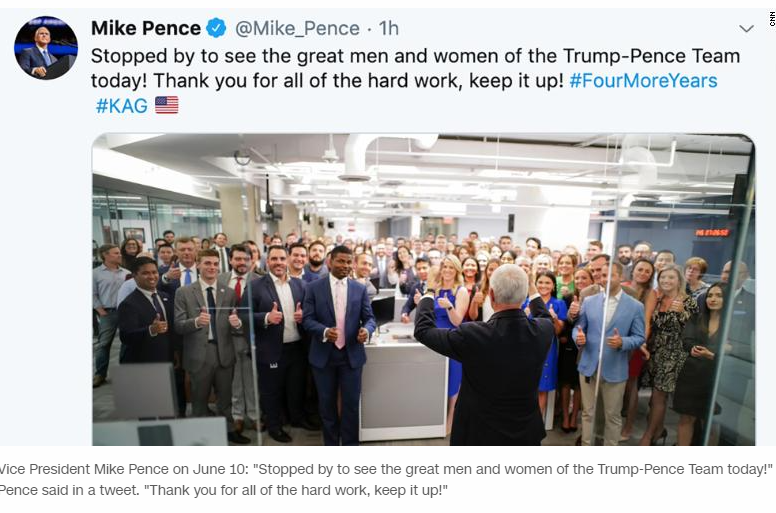 What about the President not wearing a mask in public?

Chris Cillizza at CNN recently wrote an excellent essay on this. He argued:

Because we know that wearing a mask, at least for now, helps to prevent the spread of the coronavirus, Trump, as the single highest-profile leader in the country, should be wearing one -- whether or not it is absolutely required. To show people that wearing a mask isn't about, uh, creeping government control or masculinity or anything else other than being as safe as we can be, not just for ourselves but for the most vulnerable among us.

"I want to protect myself and protect others, and also because I want to make it be a symbol for people to see that that's the kind of thing you should be doing," explained Dr. Anthony Fauci recently when asked why he wore a mask.

That Trump is not doing that is bad enough. That he is actively seeking to undermine his own medical experts by touting the idea that reasonable people can disagree about the necessity of wearing a mask to slow the spread of coronavirus is beyond the pale. And deeply, deeply irresponsible.

What are our local Ogden papers saying?

While a number of Ogden articles mention mask-wearing, I could not find any editorial about the subject. Today, however, the Intelligencer ran the following political cartoon: 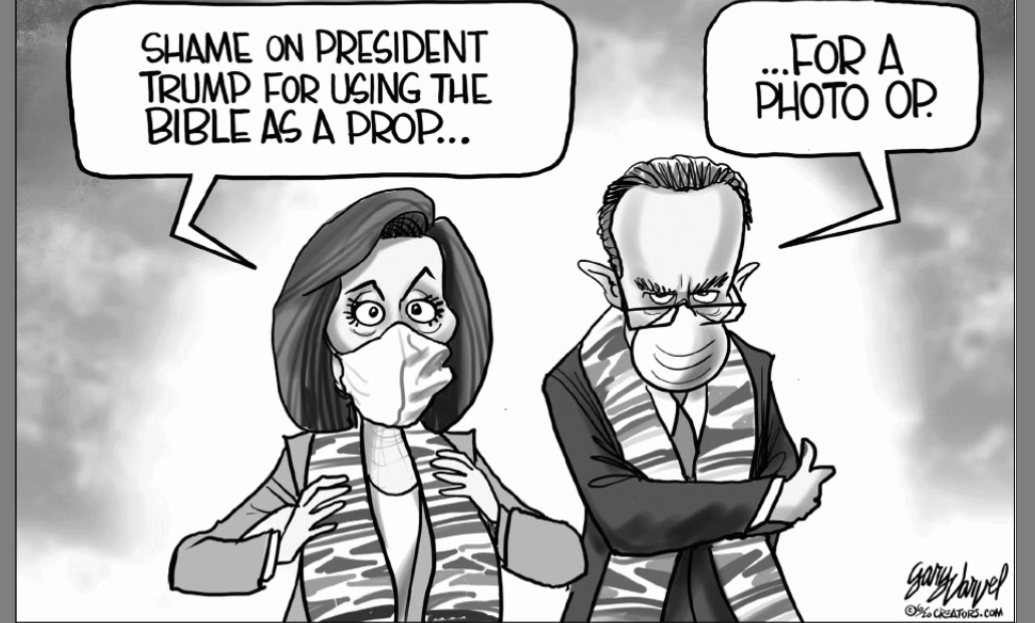 The cartoon suggests that the Democratic leaders are wearing a mask because it is a photo opportunity rather than as a measure that might lessen the virus’ impact. Why would a newspaper run this cartoon when continuing to wear masks is clearly the most prudent course? (Answer – to suggest that Democrats are hypocrites.) Additionally, Ogden has never criticized the president. So, our local papers want the country opened as quickly as possible even if it means an increasing likelihood of a new virus outbreak. How shortsighted.

(Update -- a reader points out that I may have misread the cartoon - that Pelosi and Schumer were being criticizing for using the clothing (and not the mask) as a prop. Her take makes sense.
Apologies to the cartoonist and the News-Register. (Everything looks like a mask to a blogger writing about masks.)

This allegiance to Trump by Ogden and others may have even more negative consequences as today’s LA Times tells us the bad news:

I’m sure it’s not just California. Look around the next time you are out and about and see if your conclusion is the same as mine – the use of masks is clearly declining and that's not good.

Amid protests against racial injustice, President Donald Trump is defending his decision to schedule his first campaign rally in months on a day commemorating the end of U.S. slavery and in Tulsa, Oklahoma, a city where white mobs massacred African-Americans a century ago.

But there is an added dimension. Tulsa would appear to be facing a severe outbreak of the coronavirus:

Not to worry, Trump has it covered (on his end). From CNN:

Attendees of President Donald Trump's upcoming rally in Tulsa, Oklahoma, must agree not to sue the campaign if they contract coronavirus.

Rallygoers are asked to RSVP to gain admission to the event and by registering, they must agree to a disclaimer that states they acknowledge the "inherent risk of exposure to COVID-19 exists in any public place where people are present."

A final question – how much of this will appear in Saturday’s edition of the expanded, new and improved version of the Sunday Wheeling News-Register? We shall see.

On page A7, this morning’s paper cites a NORC poll that Americans are wearing masks:

Overall, 90% of Americans say they're wearing a mask, according to the new poll conducted by NORC at the University of Chicago for the Data Foundation. That’s higher than in April, when 78% were wearing a mask in response to the disease.

On the other hand, here is what the AP reported earlier this month:

According to a Gallup poll that was conducted in mid-April, only a third of Americans said they always wore a mask or cloth face covering outside the home. Another third said they sometimes wore a mask in public, and a third reported that they never did.

Additionally, on page B7 was a picture with the caption “Kalkreuth lends a helping hand to Ronald McDonald House.” It was good to see that all five employees pictured were wearing face masks.

There was nothing on Trump/masks or his upcoming visit to Tulsa.

Off-topic – A weekly feature of the weekend News-Register is a political cartoon attacking Michigan’s Governor Whitmer. This morning’s paper did not disappoint – you can find #7 in the series on page B4.