Some updates on previous posts and the latest polling results

Three weeks ago, I did a blog post about Rob Rogers, then Pittsburgh Post-Gazette political cartoonist, whose publisher and new editor wanted the P-G to be more pro-Trump. The pressure was put on Rogers, whose cartoons are known nationally, to soften his cartoons. He refused and was fired on June 14. On Monday, Salon published an interesting interview with him. Here's a sample:

But in the end, I'm not really so worried and upset about myself as I am for the readers of the Pittsburgh Post-Gazette, who are now getting this kind of mish-mashed, right-wing, one-voice-only on the editorial page. This is seeping into other parts of the paper as well, with how stories are placed and emphasized. This is incredibly dangerous because it is being done to make the president look better.

His cartoons are available here and on his Twitter feed. A new Pittsburgh alternative weekly, The Pittsburgh Current, will soon be running his cartoons. From Rogers' Twitter feed, here's his most recent cartoon:

Th Supreme Court ruled that it is within the scope of power of the president to be a xenophobic bully. Nice.

In a related story, this paid advertisement from the Newspaper Guild of Pittsburgh and the P-G's newsroom managers appeared in a week-ago-Tuesday's Post-Gazette and on their Facebook page: 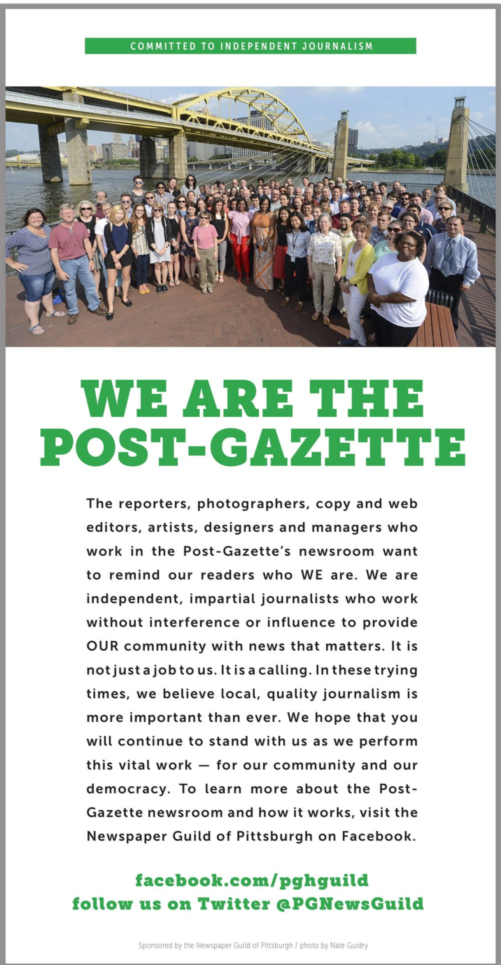 Last Friday I blogged about how the growing trade war between the Trump administration and China was causing problems for the billion dollar natural gas "understanding" between West Virginia and China. Earlier this week, Desmog put together this excellent article detailing the recent twists and turns in the deal:

As I noted in my earlier posts about this deal/understanding, very few specifics have been revealed. The Charleston Gazette-Mail reported on Monday that Appalachian Mountain Advocates has filed a lawsuit to make the information public:

A nonprofit law firm has filed a lawsuit against West Virginia University after the school failed to hand over public records about a deal between West Virginia and a Chinese energy company. . . .

This may get interesting.

According to Metro News:

Manchin is ahead 49-42, which is close to the margin of most other polls that have come out in the last several weeks.

The poll also found that President Trump remains very popular in the state. The director of PPP, Tom Jensen, believed this was important to the senate race:

“Right now the reason that Manchin’s ahead, despite Trump’s approval rating, is that Manchin is winning 25 percent of Trump voters,” Jensen said. “Certainly he can’t go a whole lot lower and still come out ahead in this election.”

The Trump factor is a big key to the race, Jensen said.

“Gov. Justice is not popular. Only 27 percent of voters see him favorably, 47 percent unfavorably,” Jensen said. “He has a really interesting situation where Democrats and Republicans both dislike him.”